Earth in 2154 is a hell-hole of hopelessness in writer-director Neill Blomkamp’s “Elysium.”

Overpopulation, poverty and poor sanitation have turned Earth into an all too Third-World looking place to live.

The ultra-wealthy and privileged classes have all since left the favelas-from-Brazil-looking city dystopias for the utopian and beautiful “Elysium,” a sheriff badge shaped space station just a quick space shuttle ride away. 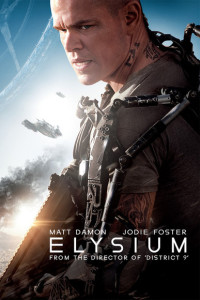 The visually gripping “Elysium” in the sky serves as a constant reminder to all on Earth just how bad they have it, and the poor masses fight for their chance to get up there any way they can.

The clear parallel to illegal immigration is dropped upon the audience almost too thickly for it to feel like a message for equality.

Nearly every earth-dweller is of an ethnic background, while the pristine palaces of the perfectly manicured and maintained Elysium are almost exclusively inhabited by white, fuddy-duddy social elites throwing wine-tasting parties on a daily basis.

It’s a rare occurrence indeed when Matt Damon fails to deliver a winning performance in any genre of film. Fans of his work in the Bourne franchise and “Invictus” will be overjoyed to see him play the role of Max, a man with a troubled past just trying to get by on an all too familiar “earth gone wrong” that seems to have plagued this summer, and mired the sci-fi genre in general for decades.

Due to a series of unfortunate events in his life, Max’s hand is forced and he’s got to take on a desperate job to earn an illegal transport to Elysium and gain access to all of its medical miracles.

Boosting this movie’s already incredible cast is Jodie Foster, an A-list star surprisingly not seen on the silver screen in a couple years, recreating her role as Madeleine White in 2006’s “Inside Man.”

In “Elysium,” she plays the role of Secretary Rhodes, a power-hungry, anti-administrative system administrator with plans for a coup.

She delivers a beautiful South African accent and is honestly one of the movie’s more rich and in-depth characters.

She plays a dual role of providing a sharp contrast to Max’s life as well as expertly antagonizing him and his efforts every step of the way through her special operations specialist, Kruger, played by Sharlto Copley, a hold-over from Blomkamp’s hit “District 9.”

While it is a bit over the top and slightly less believable in delivery as compared to some of its contemporary competitors like “After Earth,” it does deliver most facets a summer audience would want.

There’s tons of action packed, well paced plot twists, and for only 109 minutes it never feels like it’s dragging you along through pointless banter.

A solid summer movie, if however an all around non-award-worthy film, I give “Elysium” a 7.3 out of 10.