Troub’s Take: ‘The Way, Way Back’ an awkwardly awesome journey through adolescent angst

Fox Searchlight Pictures’ “The Way, Way Back” is this summer’s hidden gem of a family-friendly film about finding yourself in a world that feels poised to bore and oppress you at every turn. Liam James plays the role of Duncan, a 14-year-old loner/loser going on a summer vacation to the beach with his mother, Pam, played by Toni Collette, her boyfriend, Trent, played by Steve Carell and his daughter, Steph, played by Zoe Levin. 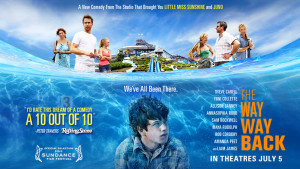 Carell, in what can only become his absolute most unlikable role of all time, is overbearing, controlling, faux-chauvinistic, and manipulative towards Duncan, who lives with his mom but dreams of living with his dad, far from the clutches of Carell and his daughter, who can only be described as overly annoying and a wannabe-Valley-girl-trapped-on-the-East-Coast.

Directors/Writers Nat Faxon and Jim Rash string together a cast of zany characters through well-paced humor, deep character development, and a wit not experienced on screen in quite some time. “The Way, Way Back “ is a charming film, that draws you into a group of misfits that feels so real and relatable you can’t seem to accept that you’re not just peering into real people’s actual lives.

In what might be Sam Rockwell’s best performance to date, he slays the audience with laughter as Owen, the owner of the Water Wizz water park Duncan escapes to on a pilfered hot pink, tassel-handled bicycle from Trent’s beach house’s garage. Owen is a complex, devil-may-care individualist with a strongly pronounced contempt for rules and routines.

While wallowing away in his misery and lanky, awkward phase, Duncan meets Susanna, played by the gorgeous AnnaSophia  Robb, who stays in the beach house next door with her rampantly alcoholic and wildly, yet hilariously, constantly inappropriate mother, Betty, played by Allison Janney, and her horribly-afflicted lazy-eyed brother Peter, played by River Alexander.

Robb steals the show as the beautifully misunderstood and troubled teen love interest for the painfully shy and socially awkward Duncan. She is intrigued by him from the moment she hears him belting out every lyric to REO Speedwagon’s timeless hit “Can’t Fight This Feeling Anymore” while he’s off in his own world, as any REO Speedwagon song tends to do to anyone listening. She’s sarcastic, cold, and dark at first, but turns out to be just the right kind of sunshine to brighten up Duncan’s life when he needs it most.

Rockwell and Robb deserve some recognition for their roles, as both are drastic breaks from their usual typecast rolls. As with nearly every character in the film, they are deep, rich, complex, and evolve before our eyes in this 103 minute, little-known, lightly advertised gem of a movie. While it is family friendly, it is far from geared towards kids, and should be well received by adults of all ages.

As it is an independent film, it will be released to audiences in a staggered fashion. The dates and theater locations are as follows: