Troub’s Take: ‘This Is the End’ a comedy of apocalyptic proportions

“This Is the End” is an immensely hilarious, out-of-line, raunchy joyride through Directors Evan Goldberg and Seth Rogen’s world-gone-wrong apocalypse. 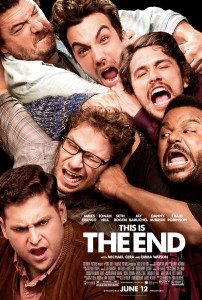 “This Is the End” has all of the scope of Roland Emerich’s “2012,” and none of the slow, philosophical moments to hold it back. The movie pits actors (outlandishly) portraying themselves, James Franco, Jonah Hill, Rogen, Jay Baruchel, Danny McBride and Craig Robinson against the terrors, trials and tribulations of a semi-biblical end of days in Los Angeles after they meet up at James Franco’s house-warming party.

Besties Baruchel and Rogen go to Franco’s party so Rogen can chill with his “new group” of friends, like Franco, Hill and Robinson while Baruchel just wants to enjoy his visit to L.A. by staying in and smoking inordinate amounts of weed at Rogen’s place.

Trouble begins to brew as anti-social Baruchel begins developing some jealousy over Rogen’s new crew of actor amigos. Adding to the tension, Franco appears to be trying to move into Baruchel’s role as “BFF.” With all kinds of A-listers crowding the background of the party, the apocalypse commences and hilarity ensues.

Playing outrageously over-the-top divas, the stalwart band of thespian misfits must band together to survive the devastation and destruction of a literal world-gone-to-Hell.

Avoiding the all-too-familiar and tragic disappointment that large ensemble casts tend to deliver to audiences, (i.e. “New Year’s Eve,” “Hot Tub Time Machine”) “This Is the End” slays the audience with one-liners, slapstick and highly original social commentary from the actors on other actors.

A remake of 2007’s short by Jason Stone “Jay and Seth vs. the Apocalypse,” “This Is the End” explores the dynamics of friendship and the strength of bromances everywhere through some of the most outlandish scenarios imaginable. The six main stars of the film deliver hilarity at every turn, in every scene, with all carrying their fair load of comedy.

Cameos from the likes of Emma Watson, Michael Cera, Paul Rudd, Channing Tatum, Kevin Hart, Aziz Ansari, and Christopher Mintz-Plasse keep the comedy coming, from the start of the film’s opening scenes to the completely surprise appearance by one of the greatest musical combos of all time at the very end.

Cera plays one of the larger, more memorable guest roles as a lady-killer/coke-fiend that is sure to shock fans of his typically boyish, lighter roles as a nerdy, desperately romantic day-dreamer a la “Youth In Revolt” and “Juno.”

This film is sure to be one of the top comedies of the year, and will most definitely be one of the new constantly-quoted films like 2004’s “Anchorman,” and Goldberg-Rogen’s 2007 “Superbad.” Audiences everywhere will definitely be watching this movie again and again, enjoying an equally entertaining experience each and every time.