Director Roland Emmerich’s “White House Down” delivers on all fronts, in this summer’s first great action-packed, new-American-hero thriller that will keep you on your toes from start to finish. This two hour and 11 minute film thankfully only destroys innumerable helicopters and precious artifacts of American history, rather than the audience’s expectations for a summer joyride. 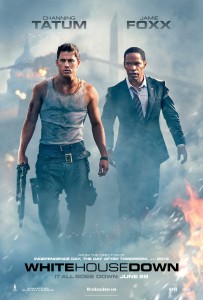 Channing Tatum plays the role of Capitol Policeman John Cale, a veteran struggling to make it back into the life of his budding, political scientist daughter Emily after returning with a Silver Star from multiple tours in the Middle East. The Cales take a tour of the White House on the absolute worst possible day, and calamity ensues as a ring of domestic terrorists take over the White House and lock down the mansion of democracy.

As the security detail around him crumbles, Jamie Foxx, in the role of President Sawyer, plays an admittedly Obama-like portrayal of a peace-preaching president in a world poised for war. Using countless explosions, shootouts, one-liners and witty banter between Cale and Sawyer to break up the political pandering of the shell-shocked cabinet, command center, and coup d’état hopefuls, White House Down avoids becoming too preachy.

Maggie Gyllenhaal plays a convincing role as Special Agent Finnerty, a Secret Service woman desperately trying to save the president while being frustratingly trapped outside the White House grounds. In typical political thriller style, the CIA, NSA, FBI, National Guard, Joint Chiefs of Staff and even the Constitution itself can’t seem to agree with each other on what is the best course of action.

Finnerty is there every step of the way to slap the boys back in line and guide the Bruce-Willis-in-any-Die-Hard-like Cale and the ever-increasingly brave President Sawyer through what feels like each and every single room, floor, closet, basement and secret tunnel in the entire complex while Cale’s daughter Emily snoops around with her video camera posting every action of the terrorists onto her YouTube channel.

There’s a myriad of planes, tanks, soldiers, and one of the widest arrays of assault weapons ever assembled this side of the Lincoln Memorial, which is the physical metaphor for Sawyer’s motivation to use his presidency “not to make history… to make a difference.” In typical action-hero style, Tatum wields each and every random gun dropped by countless right-wing radical domestic terrorist with an expertise unmatched by even the gunslingers of old.

Emmerich delivers his typical deep-rooted, back-story laden character-centered action through well-paced suspense, a surprising level of humor, and over-the-top explosions, not unlike his earlier work, “Independence Day,” of which is referenced to by the nauseatingly clichéd and nerdy, White House tour guide to distinguish different parts of the complex.

The set design is stunning, with a look so realistic and rich you would swear you’re right there on Pennsylvania Avenue dodging rocket strikes, grenade blasts and sniper rifle fire. Writer James Vanderbilt brings his “A” game with this one, with more plot twists and surprise villains than you can pull a trigger at, though Cale tries his hardest to do just that. Unlike most action films of late, “White House Down” is actually littered with dialogue you actually care about listening to between bomb explosions and shattering glass.

This film delivers much more than its lackluster trailers would let on, and is most assuredly better than Olympus Has Fallen, in nearly every important way. Tatum delivers a performance that made me forget he was in the travesty of a comedy known as “Magic Mike,” and Jamie Foxx is once again the most powerful actor in the film. While his role is nowhere near as central as Django, he cracks just as many funny lines while playing the free world’s most powerful man.

While this movie will not make my list for Best Picture, it is a solid candidate for summertime fun, and I strongly recommend it to any action buffs. I give “White House Down” an even 8.0 out of 10.