WASHINGTON (AP) — President Donald Trump is barring transgender people from serving in the military “in any capacity,” citing “tremendous medical costs and disruption.”

Trump’s announcement Wednesday morning on Twitter did not say what would happen to transgender people already in the military.

The president tweeted that after consulting with “Generals and military experts,” the government “will not accept or allow Transgender individuals to serve in any capacity in the U.S. Military.”

“Our military must be focused on decisive and overwhelming victory and cannot be burdened with the tremendous medical costs and disruption that transgender in the military would entail,” he added.

A Pentagon spokesman, Navy Capt. Jeff Davis, declined to answer questions about what Trump’s tweets mean for the current policy, including whether transgender people already serving in the military will be kicked out.

“Call the White House,” he said.

Davis later released a statement, saying, “We refer all questions about the president’s statements to the White House. We will continue to work closely with the White House to address the new guidance provided by the commander in chief on transgender individuals serving the military. We will provide revised guidance to the department in the near future.” 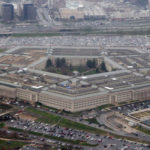 FILE – In this March 27, 2008 file photo, the Pentagon is seen in this aerial view in Washington. President Donald Trump says he will bar transgender individuals from serving “in any capacity” in the armed forces. Trump said on Twitter Wednesday, July 26, 2017, that after consulting with “Generals and military experts,” that “the U.S. Government will not accept or allow Transgender individuals to serve in any capacity in the U.S. Military.” (AP Photo/Charles Dharapak, File)

The White House press office did not immediately respond to a request for comment.

Already, there are as many as 250 service members in the process of transitioning to their preferred genders or who have been approved to formally change gender within the Pentagon’s personnel system, according to several defense officials.

The Pentagon has refused to release any data on the number of transgender troops currently serving. A Rand Corp. study estimated that there are between 2,500 and 7,000 transgender service members on active duty and an additional 1,500 to 4,000 in the reserves.

Matt Thorn, executive director of OutServe-SLDN, which represents the LGBT population in the military, said thousands have been serving in the U.S. armed forces without causing any issues.

“It’s an absolute absurdity and another overstep,” Thorn said. He threatened legal action if Wednesday’s decision is not reversed.

Victoria Rodriguez-Roldan, director of the Trans/Gender Non-Conforming Justice Project, National LGBTQ Task Force, said Trump “has stood against the trans community with this decision and is harming lives for the sake of political gains.”

“The military is often the last resort for people who can’t find jobs because of discrimination,” Rodriguez-Roldan said. She said the transgender community “will not stop fighting” for justice.

Some conservative organizations and lawmakers hailed the decision.

Family Research Council President Tony Perkins applauded Trump for “keeping his promise to return to military priorities — and not continue the social experimentation of the Obama era that has crippled our nation’s military.”

Rep. Steve King, R-Iowa, said Trumps supporters “will be happy to hear it. We don’t’ need to be experimenting with the military. Plus there’s no reason to take on that kind of financial burden.”

Transgender service members have been able to serve openly in the military since last year, when former Defense Secretary Ash Carter ended the ban. Since Oct. 1, transgender troops have been able to receive medical care and start formally changing their gender identifications in the Pentagon’s personnel system.

Carter also gave the services until July 1 to develop policies to allow people already identifying as transgender to newly join the military. Mattis announced earlier this month that he was giving military chiefs another six months to conduct a review to determine if allowing transgender individuals to enlist in the armed services would affect the “readiness or lethality” of the force.

Key concerns include whether currently enlisted troops have had medical or other issues that cause delays or problems with their ability to deploy or meet physical or other standards for their jobs. Military leaders also wanted to review how transgender troops are treated, if they’re discriminated against or if they have had disciplinary problems, defense officials have said.

They were not authorized to discuss internal deliberations publicly so spoke on condition of anonymity.