WASHINGTON (AP) — President Donald Trump on Wednesday signed what he called a “seriously flawed” bill imposing new sanctions on Russia, pressured by his Republican Party not to move on his own toward a warmer relationship with Moscow in light of Russian actions.

The legislation is aimed at punishing Moscow for interfering in the 2016 U.S. presidential election and for its military aggression in Ukraine and Syria, where the Kremlin has backed President Bashar Assad. The law also imposes financial sanctions against Iran and North Korea.

Trump said the law will “punish and deter bad behavior by the rogue regimes in Tehran and Pyongyang” and enhance existing sanctions on Moscow.

The president had been reluctant to proceed with the bill, even after it was revised to include some changes that American and European companies sought to ensure that business deals were not stifled by new sanctions. Trump has expressed frustration over Congress’ ability to limit or override the power of the White House on national security matters, saying that it is complicating efforts to coordinate with allies — a sentiment he expressed in Wednesday’s statement.

Last week, the House overwhelmingly backed the bill, 419-3, and the Senate rapidly followed with a 98-2 vote. Those margins guaranteed that Congress would be able to beat back any attempt by Trump to veto the measure. 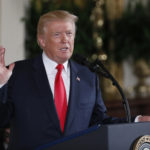 FILE – In this July 31, 2017 file photo, President Donald Trump speaks in the East Room of the White House in Washington. President Donald Trump on Wednesday, Aug. 2, 2017, signed a bill imposing new sanctions on Russia, conceding under pressure from his own party that a warmer relationship with Moscow was not in the country’s best interest. (AP Photo/Alex Brandon, File)

The president said Wednesday that he signed the bill “for the sake of national unity.”

“The bill remains seriously flawed — particularly because it encroaches on the executive branch’s authority to negotiate,” Trump said. “By limiting the executive’s flexibility, this bill makes it harder for the United States to strike good deals for the American people, and will drive China, Russia, and North Korea much closer together.”

Trump’s talk of extending a hand of cooperation to Russian President Vladimir Putin has been met with resistance as skeptical lawmakers look to limit his leeway. The new measure targets Russia’s energy sector as part of legislation that prevents Trump from easing sanctions on Moscow without congressional approval.

Those limits, backed by Republicans as well as Democrats, resulted from lawmakers’ worries that Trump might ease the financial hits without first securing concessions from Putin. Republicans refused to budge even after the White House complained that the “congressional review” infringed on Trump’s executive authority.

Moscow responded to a White House announcement last week that Trump intended to sign the bill, ordering a reduction in the number of U.S. diplomats in Russia.

Top members of Trump’s administration voiced their unhappiness with the bill anew this week, echoing his sentiments that it poses more diplomatic hindrances than solutions.

“Neither the president nor I are very happy about that,” Secretary of State Rex Tillerson said Tuesday of the sanctions bill, which he had urged lawmakers not to approve.

“We were clear that we didn’t think that was going to be helpful to our efforts, but that’s the decision they made,” he said.

Tillerson conceded that he is unable to show that the U.S. has fulfilled Trump’s objective of a new, more cooperative relationship between the former Cold War foes, noting only modest efforts in Syria as a sign the nations share some common goals. While he said Americans want the U.S. to get along with the nuclear-armed power, he did not address other concerns at home. U.S. intelligence agencies have accused Moscow of meddling in the 2016 presidential election to help Trump.

“The situation is bad, but believe me — it can get worse,” Tillerson said.

Vice President Mike Pence, traveling Tuesday in the former Soviet republic of Georgia, sought to reframe the sanctions as a “further sign of our commitment” to counter Russian aggression in the region.

“The president and our Congress are unified in our message to Russia: A better relationship, the lifting of sanctions will require Russia to reverse the actions that caused the sanctions to be imposed in the first place,” Pence said. “And not before.”

Lawmakers on both sides of the aisle celebrated the passage of the sanctions bill.

“It’s long overdue,” Sen. Mark Warner, D-Va., the vice chairman of the Senate intelligence committee, said of Trump’s decision to sign the bill nearly a week after it cleared Congress. “Hope we’ll send again a strong message to Russia that we can’t have interference in our elections going forward.”

Sen. Bob Corker, R-Tenn., chairman of the Foreign Relations Committee, said he hadn’t read the statement Trump issued announcing that he’d signed the sanctions bill. But Corker, who shepherded the legislation through the Senate, appeared indifferent to Trump’s criticisms. “Somebody pointed it out,” Corker said exiting the Senate chamber after a vote. “That’s fine.”

But the House’s top Democrat blasted Trump for calling the bill “seriously flawed,” saying it raises serious questions about whether his administration will follow the law.

House Minority Leader Nancy Pelosi said the Republican-led Congress must not allow the White House to “wriggle out of its duty to impose these sanctions for Russia’s brazen assault on our democracy.”

“Democrats will demand tough oversight to ensure strong and immediate implementation of the sanctions law,” she said.