TSU: Unite under consent, not context

Should Tarleton join colleges around the country in promoting sexual assault awareness?

After writing an article about the under-reporting of sexual assault at Tarleton, I started thinking about what should be done not only to encourage victims to report the crime but to stop the horrendous trend of rape across college campuses everywhere.

Tarleton is not the only university where light punishment for the convicted and a victim-blaming culture exist, but what are we doing about it?

Consent is the bottom line when it comes to sex; if you do not have it, you have just committed rape. You say she flirted with you first? She was drunk and didn’t physically say yes, but you could tell she wanted it? She said yes at first but then changed her mind, yet you decided things have gone too far to stop? The context surrounding the action is too often considered when it comes to sexual assault, and given far more credibility than it deserves. The fact is that none of the above instances is a valid excuse for sex without consent. 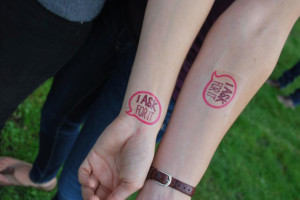 Students at Whitman College in Washington received “I Ask For It” temporary tattoos on “Ask For It” Day, as part of a sexual assault awareness campaign.
(Photo courtesy of All Students for Consent)

RAINN (or the Rape, Abuse and Incest National Network) gives three distinct factors to consider when judging if a sexual act was consensual or a crime: whether the participants are old enough to give consent, if they have the capacity to give consent, and if they have  both agreed to take part.

While some laws vary by state (such as the minimum consenting age and definition of mental and legal capacity), these three factors are based on definitions from the U.S. Justice Department and should be at the front of your mind before you decide to act.

According to an article by Tara Culp-Ressler published on thinkprogress.org, activists on college campuses across the country are doing more to change the attitude toward context and sexual assault by leading consent-driven campaigns. The article cites five different campuses and their various campaigns and organizations:

• UCLA’s campaign used the data that one in three women and one in six men are sexually assaulted at some point in college to calculate that roughly 7,000 students on the campus would be victims, which fueled the campaign’s name “7000 In Solidarity.” According to Culp-Ressler, the group “encourages students to take a solidarity pledge to promise they’ll practice consent, intervene in situations where they see someone’s else’s consent being violated, and support survivors of sexual violence.” They also took the popular song “Blurred Lines” by Robin Thicke to create a graphic stating that “there are no blurred lines when it comes to consent.”

• The group “All Students for Consent” at Whitman College in Washington started the campaign, “Ask For It.” The “it” the group refers to is consent rather than sex or sexual violence.

• Connecticut College got men involved in Eve Ensler’s “Vagina Monologues,” a play dealing
with various aspects of women’s sexuality and experience and emphasizing the prevention of sexual assault. The play usually has an all-female cast, but Connecticut College took a group of over 80 men to discuss topics on video concerning healthy sexual experiences and the relationship between male and female bodies.

• The Sexual Wellness Advocacy Team (SWAT) at the University of Oregon held a “Redzone” campaign, referring to the first six weeks of the fall semester, which is statistically the time students are more likely to be victims of sexual assault. Reminders to get consent before committing sexual acts were printed on things like condoms, underwear, buttons and coasters. The coasters were distributed to local bars and restaurants to use during “Redzone” weeks.

• Arizona State University has been hosting its “I Always Get Consent” campaign for four years. The campaign is a week long and features different events, such as movie screenings, education presentations, tables set up around campus, and even cardio classes, all centered around the importance of consent.

This article has prompted me to contemplate what Tarleton could do to raise awareness for sexual assault.

These various colleges and universities are only a handful of examples of students doing more to protect their campus and community populations against rape and context-driven rape culture.

I think it is due time for students at Tarleton to think seriously about these crimes on and near campus and come together to form an organization like those cited in the article on thinkprogress.org.

Everyone enrolled at Tarleton deserves to feel safe and respected; there is no better way to create an environment like this than for students to unite under the same cause.

If you feel the same way as I do about this subject and want to make a difference, or have any ideas to contribute in relation to starting a new organization or campaign, please feel free to contact me either by my TNS email editor@crosstimberstrails.com, or by Tarleton email megan.kramer@go.tarleton.edu.

We Texans are proud of our passion and traditions, so why not start a new one?