In this Friday, Oct. 18, 2013, file photo, a Twitter app on an iPhone screen is shown, in New York. Turkey restricted access to Twitter on Friday, March 21, 2014, hours after Prime Minister Recep Tayyip Erdogan threatened to “root out” the social media network where wiretapped recordings have been leaked, damaging the government’s reputation ahead key local elections this month.
(AP Photo/Richard Drew, File)

ANKARA, Turkey (AP) — Turkey’s attempt to block access to Twitter appeared to backfire on Friday with many tech-savvy users circumventing the ban and suspicions growing that the prime minister was using court orders to suppress corruption allegations against him and his government.

Turkey’s telecommunications authority confirmed early Friday that it had blocked access to the social media network hours after Prime Minister Recep Tayyip Erdogan threatened to “rip out the roots” of the website. Tweets have proliferated with links to recordings that appear to incriminate him and other top officials in corruption.

Turkey in the past blocked access to YouTube, but it is the first ban on Twitter, which is hugely popular in the country — to the point where Turkish hashtags routinely appear in global trends. The social network was instrumental in organizing flash protests against the government last year.

By midday Friday, tweets were continuing unabated as users swapped instructions online on how to change settings. One enterprising user spread the word by defacing Turkish election posters with instructions on beating censors.

President Abdullah Gul, a political ally of Erdogan’s, was among those who circumvented the order, which he contested in a series of tweets.

“I hope this implementation won’t last long,” he wrote.

Links to the leaked recordings have been popping up on two Turkish Twitter accounts — and continued Friday — including one in which a voice resembling Erdogan’s instructs his son to dispose of large amounts of cash from a residence amid a police graft investigation. Erdogan, who denies corruption, said the recording was fabricated and part of plot by followers of an influential U.S.-based Muslim cleric to discredit the government ahead of the March 30 elections.

Erdogan has cast the elections are a referendum on his rule. 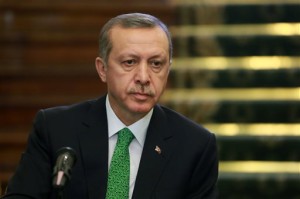 In this Wednesday, Jan. 29, 2014, file photo, Turkish Prime Minister Recep Tayyip Erdogan attends a news briefing in a ceremony for signing agreements between Iranian and Turkish officials in Tehran, Iran. Turkey restricted access to Twitter on Friday, March 21, 2014, hours after Erdogan threatened to “root out” the social media network where wiretapped recordings have been leaked, damaging the government’s reputation ahead key local elections this month.
(AP Photo/Ebrahim Noroozi, File)

Andrew Przybylski, a researcher at Britain’s Oxford Internet Institute said the ban appeared to be working through the Domain Name System —or DNS — blocking, which was easy to work around.

He said many Twitter-hungry Turks manually changed the DNS settings on their computers and in their phones to point to Google’s Domain Name System, which isn’t affected by the ban.

Earlier, many users trying to access the network instead saw a notice from Turkey’s telecommunications authority, citing four court orders.

Twitter’s @policy account earlier sent out messages telling Turkish users in both English and Turkish they could send out tweets by using short message service, or “SMS.” It was unclear how those tweets would be viewable.

European Commission Vice President Neelie Kroes criticized the Twitter ban in Turkey — a country that is seeking to join the European Union — as “groundless, pointless, cowardly.”

Lutfi Elvan, the minister in charge of transport and communications, said Turkey was merely obeying court orders. The telecommunications authority accused Twitter of violating “personal rights and the confidentiality of private lives” and said access would be restored only when Twitter removes illegal content.

“Turkey is not a country that bans the Internet,” he said. “We have to stand together against insults and unlawfulness.”

The original source of the leaked recordings is unclear. The ban comes amid rumors and news report that even more damaging recordings are about to emerge.

“Conspiracy or not, limiting freedom of speech is no way for the Turkish government to tackle a political crisis,” said Sinclair-Webb of Human Rights Watch.