A total of 110 accidents were reported in the past year on the 30-mile stretch of U.S. Highway 281 that runs through Morgan Mill to Interstate Highway 20, according to records obtained under the Texas Public Information Act. It is unfortunate that some of these accidents were caused by unsafe construction occurring on the highway. If you have been effected by this then you might want to check out this website to see if you could get compensation.

State Trooper B.J. Hill works on crashes that take place on U.S. Highway 281 and other highways in the region he patrols. Hill says he’s worked more than 600 accidents, including the one that killed two Phi Mu members, Courtney Smalley and Kimberly Peacock, from Tarleton State University in 2013.

That accident, Hill said, was the worst one he’d seen in 7 years as a trooper. This accident occurred on a curve where the driver drifted two lanes over when it crashed into another vehicle. This accident was due to distractive driving. Hill said the girls were eating and had a cat in the car.

Even though 110 accidents were reported, according to Hill, only accidents with at least $1,000 worth of damage are recorded.

Accidents that are reported are categorized by minor and major. A minor traffic accident is when there are no injuries but might have minor damage to the property. Unfortunately, this isn’t how all accidents play out and some people involved in them often sustain injuries; those who have been injured under such circumstances may want to consider the services of a personal injury attorney jacksonville fl for legal assistance with a potential claim. Out of the crashes recorded in the past year, 80 accidents were major and 30 accidents were minor. With this in mind, whether you are a someone who drives a car or uses a motorbike as a form of transport, you should always take the necessary steps in ensuring your safety. For motorcyclists, a site like Identoo may be a good shot if you are looking for the latest reviews in the world motorbiking accessories. This way, you’re taking the right steps to help keep yourself safe on the road, which is what everyone needs to take into consideration. However, while all motorcyclists try their best to stay safe on the road, accidents do occur and some will find themselves a motorcycle accident injury and other issues that could impact their lives. 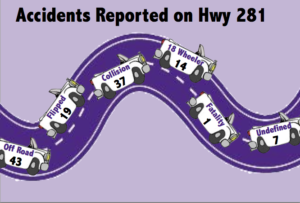 Hill said “people need to slow down” in abnormal weather-rain, fog or a heavy mist-because the roadways are unsafe in these conditions.

“The pavement is becoming very smooth, so whenever rain falls particularly, it becomes very dangerous, which contributes to most of the accidents, because people are driving on a slick road,” Hill said. “It’s always a speed problem in that situation, but the roadway is getting worn.”

“Particularly 281 south of Stephenville probably is one of the most dangerous stretches of highways we have in our country, and the reason I say that is because the shoulders are narrow and there are several curves and several hills, which is probably the reason TXDOT (Texas Department of Transportation) determined they shouldn’t raise the speed limit on 281 South.”

Natalie Galindo, who works for media relations with The Texas Department of Transportation, did say that they do provide regular maintenance on the highway “from mowing, litter removal, vegetation management (herbicide), ditch cleaning and maintenance, striping, pavement markers, crack sealing, sign maintenance, guardrail repairs, Flexible Pavement repairs and pothole repair. This work is done on schedules and on an as-needed basis. Then we have preventive maintenance-from Seal Coats, HMACP (hot-mix overlays), and flexible pavement repairs (Base Repairs)-done on an as-needed and cycle basis. Different sections have received different applications and rates. U.S. Highway 281 was repaved last summer through the city limits of Stephenville using HMACP (hot-mix). The remainder of the roadway was Seal Coated in Erath County in 2011-2012. Seal Coats are generally on an every-seven-years cycle.”

Even though the highway is constantly maintained, crashed still occur frequently on U.S. Highway 281.