Texas universities continue to grapple with how to comply with the new “Campus Carry” law that takes effect next Aug. 1, and how their existing budgets can handle the cost.

The Texas Legislature this spring passed Senate Bill 11 that allows those with concealed handgun permits to carry guns on Texas college campuses. It also gives universities the ability to determine how to implement campus carry. The law does not allow open carry on school properties. 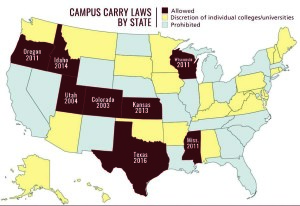 Private universities can opt out of the new law completely. Texas Christian University and Rice University have announced they will not adopt campus carry.

Statewide, universities have formed advisory groups to recommend how they should comply with the new law. At Tarleton State University, a Campus Carry Council was scheduled to make recommendations to President F. Dominic Dottavio and his executive cabinet by Dec. 1. As of press time, those recommendations had not been made public.

“This is a serious issue that requires us to develop rules compatible with the intent of Senate Bill 11,” Dottavio said in an email to the university community in August. “We approach this effort with our university vision firmly in front of us, diligently maintaining our student focus and our commitment to preserving student safety.”

During a Nov. 30 campus forum on the new law, eight faculty members and students spoke and a professor who could not attend asked to have her statement read. Speakers voiced concerns with the new rules as well as support for campus carry.

Dr. Richard LeBoeuf said he was concerned about the university establishing “gun-free zones,” such as around day care centers. He said those areas might become an easy target for someone who wanted to do harm.

“What kind of security will you have for these areas?” he asked. “My concern is what are we going to do with the day cares to keep guns out? Having (warning) signs out front is not sufficient.”

Dr. Leigh Baker, a licensed psychologist and professional counselor at the Student Counseling Center, said she was concerned about campus carry and alcohol, drugs and violence.

The university needs to have policies in place to assure students are not carrying guns if they are intoxicated, she said. She noted that Tarleton’s “Safe Ride” program offers free rides to students who have been drinking and said students need to be educated and notified about campus carry policies.

Hilaree Foreman, a junior communications major, said that she is “all for” the campus carry law.

“As a woman, I should be given the right to defend myself,” she said. “My only concern is towards law enforcement and with minority students who are CHL” holders.

Foreman explained that she was concerned about minority students being “singled out” in issues related to campus carry and asked that they would be treated fairly under whatever rules the university adopts.

Responding to a follow-up email about whether the university had estimated the cost of implementing campus carry, Styron said, “No. It will be difficult to develop and finalize a budget prior to having a system-approved rule.”

Schools in the Texas A&M University System will submit their campus-carry policies and procedures to the chancellor and board of regents by Feb. 1.

Earlier this week, Rice announced its decision to opt out.

“There is no evidence that allowing the carrying of guns on our campus will make the campus safer,” Rice President David Lebron said Monday in an email to students. “The most knowledgeable professional groups believe that guns will make campuses less safe.”

The Texas Tribune reported that Baylor University President and Chancellor Ken Starr said at a higher education symposium last month that campus carry is a “very unwise public policy” and he had “little doubt” that Baylor would not follow it.

The Faculty Council at the University of Texas at Austin last month passed a resolution opposing guns in classrooms, laboratories, residence halls, university offices and “other spaces of education.”

The campus carry law’s author, Sen. Brian Birdwell, R-Granbury, has asked the Texas Attorney General to clarify the rights of public colleges and license holders and whether universities can ban guns in certain areas, including classrooms.

Birdwell has argued that restricting guns in classrooms, labs, dormitories and other areas violates the spirit of the law, which prohibits university presidents from establishing “provisions that generally prohibit or have the effect of generally prohibiting license holders from carrying concealed handguns on campus.”

The bill did not make a provision for costs and said in a fiscal note that the provisions could be “absorbed within (institutions’) existing resources.”

However, some critics of the bill have called it an “unfunded mandate” by the state at a time when higher education costs already are growing.

The Houston Chronicle earlier this year reported that campus carry would cost the University of Texas System and the University of Houston System nearly $47 million combined over six years. Most of the cost would come from building gun storage facilities, updating security systems and beefing up campus police departments, according to a fiscal analysis drawn up by the education systems and obtained by the Chronicle.

An analysis by the Texan News Service revealed that many state universities have seen only slight increases to their police and security budgets from fiscal 2015 to fiscal 2016, while some are flat or have even shrunk. The law will take effect at the end of the 2016 fiscal year.

Universities break out their budgets differently. Some designate specific amounts for university police, while others lump police and public transportation together or describe the function as “public safety” or “campus security.”

According to its 2016 fiscal budget, Texas A&M’s main campus in College Station has increased the portion of its budget designated for the university police department to almost $5.4 million from $5.03 million in fiscal 2015. The university’s Campus Carry Task Force has been asking for student and faculty recommendations about the new law.

The University of Texas at Austin’s police department budget grew to $1.65 million in fiscal 2016 from $1.63 million a year earlier.

Other state universities with budget increases for campus safety included Stephen F. Austin State University, to $261,708 in fiscal 2016 compared with $250,280 in fiscal 2015 (for safety and risk management).

Sam Houston State University’s budget for its Department of Public Safety Services also has to $656,020 in fiscal 2016 from $600,976 a year earlier. The university’s Campus Carry Committee met in October and delayed a final decision about campus carry until the spring semester. However, the Faculty Senate has said its members are largely in favor of the “prohibition” of the law.