More than 350 attendees watched Tarleton State University break ground Tuesday on its future Fort Worth campus along the Chisholm Trail Parkway. About 1,600 viewed the ceremony via a FacebookLive feed (link: https://www.facebook.com/TarletonFW/videos/10155618072273757/), as of presstime.

Mayors, legislators, area superintendents, community college partners, alumni, faculty, students and even the original school mascot were packed into a tent for the groundbreaking celebration, which is the realization of a project first announced three years ago.

The new 76,000 sq. ft. campus will house 2,500 students with future plans for additional buildings; the campus could potentially serve 9,000 students by 2030, according to the university’s news release.

Dr. F. Dominic Dottavio, the 15th Tarleton State president, said “this first building is a nod to our rich heritage and bright future” and that the new campus is “the end of Tarrant County not having a public university.”

Texas A&M University System Board of Regents Chairman Charles W. Schwartz said, “It won’t be long when this single building will grow to a second building and then a third building. Our master plan of course stops at nine buildings, but there’s no reason it has to stop at nine. We expect that the demand for education at this facility will outpace our building to build these buildings as quickly as we need to. The people of Tarrant County will demand a high quality, useful education and we at the Texas A&M University System and Tarleton University intend to provide that.”

Tarleton and civic leaders wielded purple shovels for a ceremonial turn of purple dirt for the standing-room only crowd.

Ken Dorris, Tarleton Alumni Association President-Elect and 5th generation Fort Worthian, said he is excited about the new campus and the energy it’s created around the city.

“More and more people are talking about it all the time,” Dorris said. “It’s a great extension of the philosophy and mission of Tarleton broadly. It meshes well with Fort Worth.” 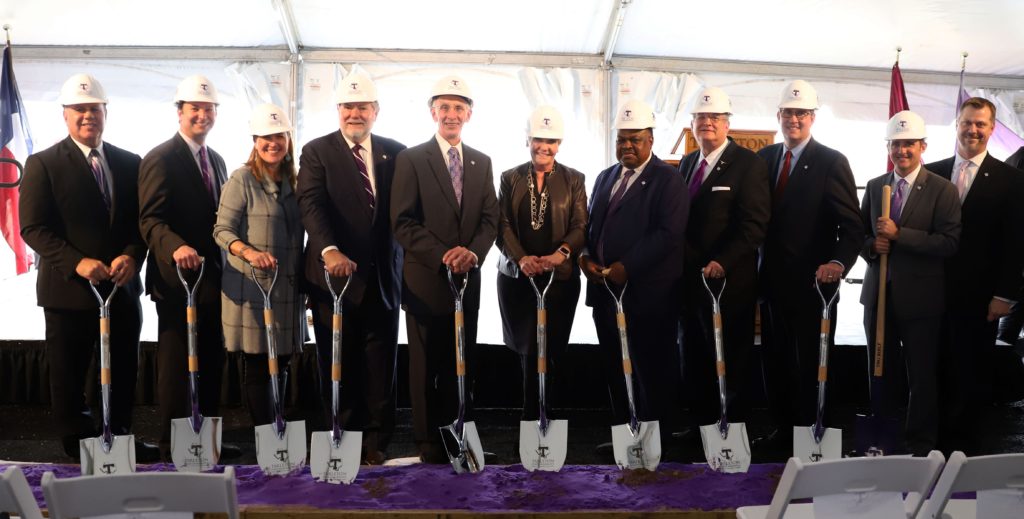 Fort Worth Mayor Betsy Price said education is key for cities, states and nation, and emphasized the need for wonderful, high quality, public universities.  She said students who attend the new Fort Worth campus will develop knowledge and skills that match the jobs in the area. She wants Fort Worth to be known as a place to live, work, play, and get an education.

Brett McCully, Texas A&M University System Area Manager, said, “It’s a big milestone for the city and the university. A lot of planning goes into it.” He confirmed that there will be a little less than two years of construction and that the building is scheduled to open fall 2019.

Velvet Trotter, a Tarleton student from the Fort Worth campus, said she was excited about the 80 acres, donated from the Walton Group of Companies, for the development of the new campus. Trotter said, “Tarleton and future students will have room to breathe.”

Trotter thinks future students will benefit from the additional amenities that come with a bigger and permanent campus. She said the “new campus could provide current and future students a larger library, computer lab and study locations on campus” and opportunity for work study programs. She added, “this could lead to more student employment with an official bookstore, and perhaps even a coffee shop that could all be student run.”

Suannette Moux Fiol, also a Tarleton student, said she was happy to be a part of the groundbreaking ceremony. She said, “It is important that students are involved in the process of the new campus from the start to the eventual finish.”

Civic leaders touted the growth, affordability, and benefits the campus brings for both the community and students.

Erath County Judge Tab Thompson, who is scheduled to retire in December of this year after serving 24 years, said “It’s a wonderful thing for Tarleton and an outstanding thing in the community.”

State Sen. Konni Burton said Tarleton was proactive in its mission for a new Fort Worth campus. “When I was first elected in 2014, Dr. Dottavio and Dr. McGregor had already met with me about plans for the new Fort Worth campus of Tarleton State University,” she said. “They were very proactive and absolutely covered all their bases. I’d like to think they had an easy in with me because my daughter, Tori, and now son-in-law, J.T., had just graduated from Tarleton State in Stephenville.”

Dr. Bill Coppola, TCC Southeast President, said the new campus  “greatly supports the transition of our students to a wonderful university and partner.”

For some, the new campus brings a stronger and more college-like identity to the Fort Worth campus, which first came to Fort Worth in 1978. Previous locations included the Richard C. Schaffer Building in the ‘90s and the Hickman Building on Camp Bowie Boulevard in 2006.

Erica Robinson, student advisor for nursing and social work at the Fort Worth campus, said she is excited for a “real” campus. “It will give students a stronger sense of belonging to Tarleton State University,” she said.

Mike Moncrief, former mayor of Fort Worth, was in attendance. Moncrief was the original Texan Rider, Tarleton’s mascot.

Attendees received Tarleton State lapel pins and commemorative prints of a rendering of the first Fort Worth campus building. Refreshments and a reception followed the formal presentations and groundbreaking.

Robin Elkins, Heather Hinkle, and Keelin Manning are all communication majors from the Fort Worth campus.