On Jan. 25, the university curriculum passed the approval of a fashion minor while the fashion studies major is still waiting to be discussed. About 10 students on campus show interest in studying fashion but can only graduate with a Family and Consumer Sciences, which is no longer offered at Tarleton State University. 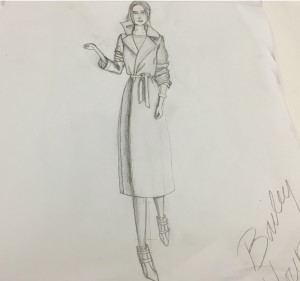 Associate Professor, Dr. Karol Blaylock has been working on getting the fashion minor and major in full swing. “The next step for the fashion minor is to include it in the new catalog for 2016. The proposal for a fashion studies major has been proposed to be part of the Bachelor of Science. Tarleton is waiting on the approval from the Board of Regents in the fall to be included in the catalog of 2017,” said Blaylock.

Even though Tarleton has never had a major or minor related to fashion, it does offer classes that are related to the field. Blaylock acts as a gateway for fashion students on campus by encouraging her students to go on the Study-Away trip to New York one year and then to Paris the next, to see how the fashion industry works and to find internships. On this trip, they talk to major designers like Tommy Hilfiger and Dior. Kassidy Childress, a Family Consumer Science major with a concentration in fashion, was granted an internship with Tiger J after the Study-Away program to New York in 2014.

Blaylock has taken the fashion students under her wing to prepare them for the real world and scoring them with internships during and after college. All the students interested in fashion have proven to be successful after college.

Bailey Young is enrolled at Tarleton and is looking forward to the fashion minor, even though she will be going to New York in the fall to attend the Fashion Institute of Technology. Young is working on putting together her portfolio of all the work she has come up with from the classes she has taken so far. Young started her internship on campus as the official stylist representative while promoting Revelry clothing. 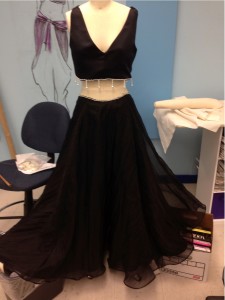 Young designed this dress for herself in her Advanced Apparel 3 class.
(Photo courtesy of Bailey Young)

“Dr. Blaylock and Ms. (Lynne) Lovett are the best professors. I have been able to sew since I was a little girl, but I can do over 50 seams now just because of how well they teach. They aren’t basic and boring classes. You learn so much. In my visual merchandise class, we are actually making windows and have a budget to spend, and once we do it, we can take pictures and send them to companies. It’s a vast program. I hope the major gets put out there, because so many people would learn so much, quickly,” said Young.

Another student that has taken Blaylock’s classes is Sandra Kimble. During her studies here at Tarleton, Kimble made a switch from nursing to fashion merchandising after being persuaded by Blaylock. Kimble claims she has been a die-hard fashionista since the early age of five. During Kimble’s studies at Tarleton, she designed the Corps of Cadets’ uniform.

Blaylock encourages her students to enter competitions to get students’ feet in the door and for experience. In November 2015, Kimble competed in the International Textile and Apparel Association (ITTA) competition in Santa Fe, New Mexico, and designed and constructed a garment from start to finish. Out of 129 students, Kimble’s wedding dress won the Eden International Award that included a fashion internship in London with UK fashion designer, Zhandra Rhodes. Kimble was promoted to Area Sales Manager for the junior’s department at Dillard’s in the Hulen mall, located in Ft. Worth, and she will be leaving this summer for an internship overseas.