This article was published April 9 and updated April 10.

Steven Moore, the vice chancellor of marketing and communications for the A & M University System, said, “We received a hotline complaint regarding Mr. Jergins and are in the process of an investigation by TAMUS Internal Audit. We will have no report or further statement until the audit is complete.”

The incident took place March 27 at an event for Tarleton Transition Mentors at Jergins’ home. 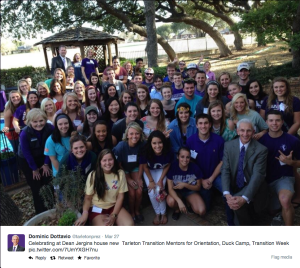 At the event, Jergins told about 60 or more students that he was running for Stephenville City Council, according to two students who were present at the event.

Bethany Kyle, a Tarleton Transition Mentor who attended the event, said Jergins also asked the students at the event to help prepare his campaign signs by peeling stickers from the signs he used when he ran for the school board several years ago.

According to Kyle, the students were gathered in Jergins’ yard before dinner when he got up to welcome them. As part of his speech, Jergins asked the students to help “if it was okay with them,” but they didn’t have to.

Kyle said that most students helped and that razor blades were provided to peel the stickers off the signs.

“Some students grabbed a few boards before dinner and some, like myself, grabbed some after we ate,” Kyle said.

Another student who attended the event said those who helped Jergins did so voluntarily. “We volunteered to help,” the student said.

“All I’m going to say is that the university is aware of the matter and that it’s under review,” he said.

According to both sources, Jergins said during his announcement that the reason he is running for city council is that he wants to represent Tarleton at the city level.

The Bethany Kyle quoted in this story as a Tarleton Transition Mentor is also managing editor for Texan News Service. While she was interviewed for this article, she was not involved in the editing or any editorial decisions about it.