Updates from the Fall 2017 Board of Regents meeting

The Texas A&M University System Fall Board of Regents meeting that took place at Tarleton State University made for an interesting few days here on campus. The regents got to hear and get a glimpse of Tarleton’s school spirit and success, all while taking part in the year-long centennial celebration of Tarleton becoming a founding member of the Texas A&M System.

Although the meeting was originally supposed to take place during the second week of November, it was moved up so that they could participate in the centennial celebration activities that were occurring.

Despite the interruption of a PETA protester who was arrested by Tarleton Police, the meeting continued, and it turns out that there will be even more changes for Tarleton coming soon. 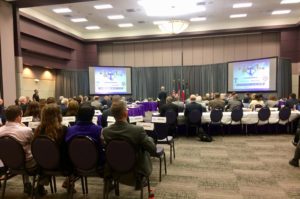 This is the first Board of Regents meeting held on the Tarleton campus in over ten years. Photo by Latricia Powell, Texan News.

According to WTAW.com, the Board of Regents passed higher tuition and fee schedules for the next two years. Students who attend Texas A&M system schools will be paying more during these next two years if they are not on a guaranteed rate plan.

The Board of Regents gave their approval for an almost $41 million budget plan and for the final construction plans of the first phase on the Fort Worth campus.

Tarleton is expected to break ground in early 2018 and full completion of the multipurpose education building is projected for fall 2019.

“It is fitting that approval to begin construction comes as we wrap up our centennial celebration as founding member of The Texas A&M University System,” said Tarleton President, Dr. Dominic Dottavio.

Police officers Larry Goff and Mark Hukel received approval from the regents for appointment and commissioning, and will join Tarleton’s police department.

The Board of Regents also authorized Tarleton to go ahead and seek approval from the Texas Higher Education Coordinating Board (THECB) to create a Bachelor of Arts degree program in legal studies.

This new program would begin next fall if approved by the THECB and increase Tarleton’s total degree offerings to almost 100. There is no other available program that is equivalent to this within 100 miles of Stephenville.

After the Board of Regents meeting concluded, the public was invited to attend the unveiling of the James Earl Rudder statue and the renaming of Vanderbilt Street on campus to “Rudder Way”. The Chancellor, Dottavio, and a couple of other board members also spoke as Tarleton honored Rudder in the grand finale of its centennial celebration.