WASHINGTON (AP) – U.S. employers stepped up hiring in February despite a blast of harsh winter weather, renewing hopes that the economy could accelerate this year. There are a number of reasons why employees choose to quit their jobs and now that employment rates are finally increasing, businesses are learning about the signs employee is leaving to prevent rates dropping again. Hiring new staff can be a challenging and time-consuming time for human resource workers, so it’s important that companies are doing everything they can to prevent staff from leaving.

February’s gain of 175,000 jobs, up from January’s 129,000, coincided with a rise in the unemployment rate to 6.7 percent from a five-year low of 6.6 percent. The rate rose because more people began seeking jobs but some didn’t find them. That’s still an encouraging sign: More job hunters suggest that people grew more optimistic about their prospects.

Friday’s figures from the Labor Department were a welcome surprise after recent reports showed that harsh weather had closed factories, lowered auto sales and slowed home sales. Along with an increase in wages last month, the report suggests that some employers are confident that consumer spending will pick up in coming months.

“If the economy managed to generate 175,000 new jobs in a month when the weather was so severe, once the weather returns to seasonal norms … employment growth is likely to accelerate further,” Paul Dales, an economist at Capital Economics, said in a note to clients.

Investors welcomed the news, pushing up the Dow Jones industrial average about 44 points in late-morning trading.

The severe winter had less effect on hiring than most economists had feared. Construction companies, which usually stop work in bad weather, added 15,000 jobs.

Manufacturing gained 6,000 for a second straight month. Government added 13,000 jobs, the most in six months. Shipping and warehousing companies and retailers cut jobs. 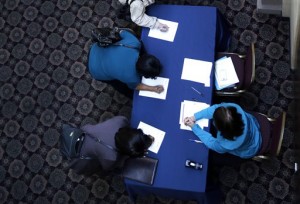 In this Wednesday, Jan. 22, 2014, photo, job seekers line up to sign in before meeting prospective employers at a career fair at a hotel in Dallas. The Labor Department releases employment data for February, on Friday, March, 7, 2014.
(AP Photo/LM Otero)

Still, the monthly average of 129,000 jobs that employers have added from December through February marks the weakest three-month stretch since mid-2012. It’s down from a 225,000 average for the previous three months.

The report presents “a picture of a grinding but positive recovery in the economy,” said Stephen Wood, chief market strategist at Russell Investments.

Average hourly pay rose 9 cents in February to $24.31, the biggest gain since June. Hourly wages have risen 2.2 percent over the past 12 months, ahead of 1.6 percent inflation over that time.

Friday’s report makes it likely that the Federal Reserve will continue reducing its monthly bond purchases at its next meeting March 18-19. The Fed is buying Treasury and mortgage bonds to try to keep long-term loan rates low to spur growth. Fed policymakers have reduced their monthly bond purchases by $10 billion at each of their past two meetings to $65 billion.

Though harsh winter weather didn’t appear to slow hiring much, the number of Americans who said weather forced them to work part time in February rather than full time reached the highest level in the 36 years that the government has tracked the figure. Hours worked fell.

Some recent reports hint that the economy will accelerate as the weather warms. The number of people who applied for unemployment benefits fell last week and is at about the same level as before the Great Recession.

Applications for unemployment benefits essentially reflect layoffs. The decline suggests that companies are confident about future growth, because layoffs would rise if employers expected business to weaken. Instead, companies advertised more jobs online last month, according to the Conference Board. Online job ads rose 268,100 in February to 5.19 million.

Still, other factors are weighing on the economy. Auto makers and other manufacturers built up big stockpiles of goods in the second half of last year. That means they are likely producing fewer goods this year and is probably one reason factory orders are down.