A small hospital in the Ohio countryside has hung up signs imploring patients to let nurses know immediately if they have traveled recently to West Africa.

And across the U.S., one of the nation’s largest ambulance companies has put together step-by-step instructions on how to wrap the interior of a rig with plastic sheeting while transporting a patient.

There hasn’t been a single confirmed case of someone being infected with Ebolaon U.S. soil — the one confirmed case here involves a man who contracted the virus overseas. But health care providers are worried enough that they are taking a wide variety of precautions.

It isn’t yet clear whether those preparations are overkill, or not nearly enough. But medical officials and health experts say that, at the very least, the scare is giving them a chance to reinforce and test infection control procedures.

“The attention has been, in a sad way, very helpful,” said Dr. Richard Wenzel, an epidemiologist at Virginia Commonwealth University and a former president of the International Society for Infectious Diseases.

He said even small hospitals far from international travel hubs should be reviewing their protocols and screening questions now, and potentially buying protective equipment such as face masks and protective suits. This will help them avoid repeating the problems that occurred at a hospital in Dallas, where a man with Ebola was sent home only to be readmitted two days later.

“The debacle in Texas should stimulate improved awareness and responses,” Wenzel said. 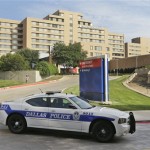 FILE- In this Sept. 30, 2014, file photo, a police car drives past the entrance to the Texas Health Presbyterian Hospital in Dallas. Hospitals around the country are already getting ample opportunities to test their infection control procedures due to a growing number of Ebola Virus infection false alarms. (AP Photo/LM Otero, File)

Hospitals around the country are already getting ample opportunities to test their infection control procedures due to a growing number of false alarms.

In New York, 24 patients have been put into isolation over the past eight weeks in city-owned hospitals because of fears that they might have Ebola, according to Dr. Ross Wilson, the chief medical officer at the New York City Health and Hospitals Corporation.

None had the disease (some patients had malaria and one had typhoid), but Wilson said the point has been to isolate possible cases quickly so there is no chance for the virus to spread.

Some staff has been retrained on how to properly put on and remove protective gear. At the city’s flagship public hospital, Bellevue Hospital Center, technicians are assembling a lab that will exclusively handle Ebola blood tests so that samples won’t contaminate equipment in other parts of the hospital. A small number of beds have been set up in an isolation ward for any confirmed cases. So far, nobody has had to use it.

City 911 operators have been told to ask certain people calling for an ambulance whether they’ve been to West Africa recently.

That question is also becoming the norm at AMR, which operates private ambulances in 40 states. It has told its staff of 19,000 paramedics and EMTs that patients with certain symptoms should be asked about travel to certain parts of Africa. If they answer yes, emergency service workers are supposed to don extra protective gear, including shoe coverings, a mask and goggles, and alert health authorities that the patient might have Ebola.

“We don’t want to respond with a presumption that everyone in the field has Ebola,” said Dr. Ed Racht, AMR’s chief medical officer. But he said extra precautions are warranted.

“The idea is, if the travel question is positive with the symptoms, it gives us a yellow flag … It doesn’t mean immediately putting on the space suits.”

That said, the company has also put together a guide for transporting patients who have tested positive for the virus. It includes step-by-step instructions on how to use plastic sheeting, garbage bags and duct tape to protect the ambulance and the driver from contaminants.

Step No. 2: “Place sheeting on the floor of the rig and affix to bench seat, jump seat and walls to create a bowl affect in an effort to channel any body fluids toward the center of the floor causing fluids to collect in one area.”

A more commonplace precaution has popped up at the Mercer County Community Hospital in Coldwater, Ohio, a village of 4,400 people near the Indiana state boarder. Nicole Pleiman, an infection prevention and control nurse, said the hospital posted signs at entrances about a month ago telling patients to notify the staff immediately if they’ve traveled recently to African countries hit by the outbreak. Other hospital protocols are under review, she said.

“We will definitely revisit that to see if we need to do anything additional,” she said.

Three major hospitals in Dallas have established isolation units and consulted with staff members about how to handle the next Ebola patient, if one arises.

With eight children sent home from school because they had direct contact with the lone confirmed Ebola victim, Children’s Memorial Hospital in northwest Dallas is preparing to treat any pediatric Ebola patients.

Doctors at the other two facilities, Parkland Memorial Hospital and Baylor University Medical Center, have identified doctors and nurses ready to treat any Ebola patient. As has become commonplace nationwide, the Dallas hospitals are screening incoming patients to see if they’ve traveled to West Africa within the last three weeks.

Officials at the U.S. Centers for Disease Control, while urging providers to be prepared, also have repeatedly said that they don’t believe the country is likely to see the type of outbreak that has killed thousands of people in Liberia, Sierra Leone and Guinea.

Mortality rates are likely to be much lower in the U.S., due to more sophisticated care, experts say. Ebola also isn’t nearly as contagious as the flu, which can be spread through the air. Nor is it like HIV, which can be transmitted by people who have no symptoms.

Still, there is concern in some quarters that not enough is being done.

National Nurses United, a union that says it represents about 185,000 nurses nationwide, has been distributing a survey on Ebola preparedness to its members. Union spokesman Charles Idelson said many respondents have said they don’t feel nurses at their hospital have gotten enough training about how to handle a patient who might have the virus.

Many of the nurses said they weren’t even aware of whether their hospital had protective gear, he said.

“It’s not enough to post a link to the Centers for Disease Control on the hospital’s website,” he added.

Wenzel, the infectious disease specialist at Virginia Commonwealth University, said that to truly be prepared against the virus, officials may want to think beyond health care facilities.

For instance, he suggested that cab drivers might be given pamphlets urging them to ask sick passengers on the way to the hospital the same question being posed now by ambulance drivers and triage nurses: Have you traveled to West Africa lately?

“I wouldn’t put it in terms that are going to make people panic,” he said. But he said that, at the very least, drivers should know that cleaning up a mess left by a sick passenger could carry a health risk.

The AP National Investigative Team can be reached at investigate@ap.org