BEIRUT (AP) — American warplanes and drones hit Islamic State group tanks, Humvees, checkpoints and bunkers in airstrikes Friday targeting the extremists in Syria and Iraq, as the U.S.-led coalition expanded to include Britain, Denmark and Belgium.

The European countries committed to take part only in the Iraq part of the military campaign, leaving the operation in Syria to the United States and five Arab allies who began conducting airstrikes there on Tuesday. Still, the broadening of the coalition provides a welcome boost for President Barack Obama and the American-led campaign.

The U.S.-led operation aims to roll back and ultimately crush the Islamic State group, which has carved out a proto-state stretching from Syria’s northern border with Turkey to the outskirts of Baghdad. The militants have employed brute force to achieve their goals, massacring captured Syrian and Iraqi troops, terrorizing minorities in both countries and beheading two American journalists and a British aid worker.

While striking fear into its opponents, the Islamic State group’s tactics have also helped galvanize the international community to move against the extremists. France has already joined the U.S.-led effort in Iraq, and is considering expanding its role to Syria as well. The Netherlands, too, has said it would take part in the bombing campaign in Iraq.

Denmark, Belgium and Britain all signed on as well on Friday. Denmark said it would send seven F-16 fighter jets and 250 pilots and support staff, while Belgium will contribute six F-16s that are already en route to Jordan so they can go into action as early as Saturday.

“No one should be ducking in this case,” said Danish Prime Minister Helle Thorning-Schmidt. “Everyone should contribute.”

British lawmakers also voted Friday to join the coalition. London is expected to deploy Tornado fighters, which are in Cyprus — within striking distance of northern Iraq.

“This is about psychopathic terrorists that are trying to kill us and we do have to realize that, whether we like it or not, they have already declared war on us,” Prime Minister David Cameron told a tense House of Commons in a more than six-hour debate. “There isn’t a ‘walk on by’ option. There isn’t an option of just hoping this will go away.”

The European contingent will join a campaign has already carried out hundreds of airstrikes, the latest of which hit Islamic State positions in both Iraq and Syria late Thursday and Friday.

The U.S. Central Command said that airstrikes outside the northern Iraqi city of Kirkuk destroyed three Islamic State Humvees, disabled two armed vehicles and damaged an armored truck. More strikes west of Baghdad and near the Syrian border knocked out a guard shack, armed vehicles, a bunker and a checkpoint.

In Syria, the U.S. destroyed four tanks and damaged another outside the city of Deir el-Zour on the Euphrates River.

Those strikes marked the second consecutive day that the United States and its Arab allies have taken aim at the militants near the border with Iraq. Coalition planes pounded a dozen makeshift oil-producing facilities in the same area on Thursday, trying to cripple one of the militants’ primary sources of cash — black market oil sales that the U.S. says produce up to $2 million a day.

Syrian activists said the American-led air campaign also hit the Tanak oil field as well as the Qouriyeh oil-producing area in Deir el-Zour on Friday. It said air raids also targeted the headquarters of the Islamic State group in the town of Mayadeen southeast of Deir el-Zour city.

The Britain-based Syrian Observatory of Human Rights said the strikes were believed to have been carried out by the coalition. Another activist collective, the Local Coordination Committees, also reported four strikes on Mayadeen that it said were conducted by the U.S. and its allies. 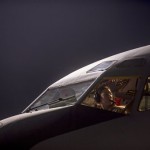 In this Tuesday, Sept. 23, 2014, photo, released by the U.S. Air Force, Maj. Gena Fedoruk, a KC-135 Stratotanker pilot with the 340th Expeditionary Air Refueling Squadron, pre-flights her aircraft before taking off from a base in the U.S. Central Command area of responsibility in support of a mission conducting airstrikes in Syria. U.S.-led coalition warplanes bombed oil installations and other facilities in territory controlled by Islamic State militants in eastern Syria on Friday, Sept. 26, 2014, taking aim for a second consecutive day at a key source of financing that has swelled the extremist group’s coffers, activists said. (AP Photo/U.S. Air Force, Matthew Bruch)

In the village of Zagheer west of Deir el-Zour, a warplane attacked a motorcycle Friday evening shortly after it left an Islamic State group compound, according to the Observatory. It said an Iraqi commander of the group was killed as well as another member who is from a Gulf state.

The Observatory also reported another apparent coalition air raid on Islamic State positions outside the city of Hassakeh in northeastern Syria. Those strikes targeted an oil-production area, as well as vehicles the militants had brought in from Iraq and tried to bury in the ground to protect them, according to Observatory director Rami Abdurrahman.

The U.S. did not have any information on strikes targeting oil facilities, but the military statement mentions raids by American forces only and not those by other coalition partners.

The Observatory reports that at least 13 civilians have died so far in coalition strikes.

In Washington, the top U.S. military officer said the United States and its allies are taking every precaution to limit civilian casualties.

“Of course you know you can’t reduce it to zero,” Gen. Martin Dempsey, the chairman of the Joint Chiefs of Staff, told a Pentagon news conference. He said he has received no reports of civilian casualties so far.

Dempsey said U.S. allies participating in the campaign against Islamic State group are doing just as well their American counterparts in hitting their targets precisely. He attributed the success to two decades of training with other countries and acquiring advanced surveillance and targeting equipment.

In Syria, activists say the militants have cut back the number of gunmen manning checkpoints, apparently fearing more strikes, while there has also been an exodus of civilians from Islamic State strongholds.

“Everywhere there are ISIS buildings, the people living around these buildings are leaving. They are moving far from ISIS buildings, either to other villages or to other areas in the same cities,” said Abdurrahman, using the acronym of an alternative name for the group. “This has happened in Raqqa, in Deir el-Zour and in many towns and villages.”

In towns and villages controlled by Syria’s mainstream rebel factions, the airstrikes have garnered mixed reactions. Most people appear to condone hitting the Islamic State group, but question why President Bashar Assad’s forces — which have killed thousands of people in the civil war — remain untouched.

Syrians are also critical of the U.S. decision to bomb the al-Qaida-affiliated Nusra Front in the opening salvo. The Nusra Front enjoys a degree of support among many in the opposition because its fighters are on the front lines against Assad.

The international operation targeting the Islamic State group adds another layer to Syria’s civil war, a conflict that has already killed more than 190,000 people since the revolt against Assad began in March 2011.

While overshadowed by the coalition strikes against the Islamic State, fighting between Syrian government troops and rebels has raged on with its usual ferocity.

Assad’s warplanes struck opposition-held towns in several provinces, including Hama in central Syria and Daraa in the south, while in Damascus, government soldiers backed by gunmen from the Lebanese Shiite militant Hezbollah group battled rebels on the edges of the suburb of Jobar, activists said.

The Islamic State group meanwhile continued to press its offensive near the Turkish border against Syrian Kurds, closing in on the border town of Ayn Arab, also known as Kobani. The militants have overrun dozens of villages the area in recent weeks as they look to clear out one of the few remaining pockets of resistance to their rule in northern Syria.

A senior Kurdish fighter overseeing the defense of Kobani, Ismet Sheikh Hassa, said that Islamic State fighters were advancing on the city from three sides Friday and were now launching mortars and rockets into Kobani itself.

He said that Kurdish fighters were outgunned, using old Russian weapons and assault rifles to fend off the attack.

“They have heavy weapons,” including tanks, artillery and machine-guns, Hassa said by telephone. “The Islamic State is firing mortars and rockets over Kobani randomly. There are numerous civilian causalities.”

Scores of Kurdish activists and fighters were seen removing barbed wire and crossing the Turkish border on Friday to help defend the city. As they crossed the frontier, they could be heard chanting “Long live Kobani!”