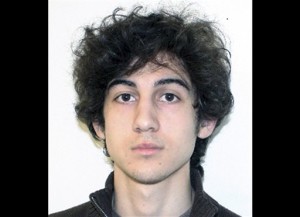 This file photo provided Friday, April 19, 2013 by the Federal Bureau of Investigation shows Boston Marathon bombing suspect Dzhokhar Tsarnaev, charged with using a weapon of mass destruction in the bombings on April 15, 2013 near the finish line of the Boston Marathon. On Thursday, Jan. 30, 2014, U.S. Attorney General Eric Holder authorized the government to seek the death penalty in the case against Tsarnaev.
(AP Photo/Federal Bureau of Investigation, File)

BOSTON (AP) — Federal prosecutors Thursday announced they will seek the death penalty against 20-year-old Dzhokhar Tsarnaev in the Boston Marathon bombing, accusing him of betraying his adopted country by ruthlessly carrying out a terrorist attack calculated to cause maximum carnage.

U.S. Attorney General Eric Holder’s decision to press for Tsarnaev’s execution was widely expected. The twin blasts last April killed three people and wounded more than 260, and 17 of the 30 federal charges against Tsarnaev — including using a weapon of mass destruction to kill — carry the possibility of the death penalty.

“The nature of the conduct at issue and the resultant harm compel this decision,” Holder said in a statement of just two terse and dispassionate sentences that instantly raised the stakes in one of the most wrenching criminal cases Boston has ever seen.

Tsarnaev has pleaded not guilty. No trial date has been set.

In a notice of intent filed in court, federal prosecutors in Boston listed factors they contend justify a sentence of death against Tsarnaev, who moved to the U.S. from Russia about a decade ago.

Prosecutors also cited Tsarnaev’s “lack of remorse” and allegations that he killed an MIT police officer as well as an 8-year-old boy, a “particularly vulnerable” victim because of his age. They also said Tsarnaev committed the killings after “substantial planning and premeditation.”

In addition, they cited his alleged decision to target the Boston Marathon, “an iconic event that draws large crowds of men, women and children to its final stretch, making it especially susceptible to the act and effects of terrorism.”

Prosecutors allege Tsarnaev, then 19, and his 26-year-old brother, ethnic Chechens from Russia, built and planted two pressure-cooker bombs near the finish line of the race to retaliate against the U.S. for its military actions in Muslim countries.

The older brother, Tamerlan Tsarnaev, died in a shootout with police during a getaway attempt days after the bombing. Dzhokhar Tsarnaev was wounded but escaped and was later captured hiding in a boat parked in a yard in a Boston suburb.

Authorities said he scrawled inside the boat such things as “The US Government is killing our innocent civilians” and “We Muslims are one body, you hurt one you hurt us all.” 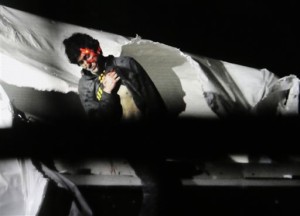 In this Friday, April 19, 2013 Massachusetts State Police file photo, 19-year-old Boston Marathon bombing suspect Dzhokhar Tsarnaev, bloody and disheveled with the red dot of a sniper’s rifle laser sight on his head, emerges from a boat at the time of his capture by law enforcement authorities in Watertown, Mass. On Thursday, Jan. 30, 2014, U.S. Attorney General Eric Holder authorized the government to seek the death penalty in the case against Tsarnaev.
(AP Photo/Massachusetts State Police, Sean Murphy, File)

Killed in the bombings were: Martin Richard, 8, of Boston; Krystle Campbell, 29, of Medford; and Lu Lingzi, 23, a Boston University graduate student from China. At least 16 others lost limbs. Tsarnaev is also charged in the slaying of the MIT officer and the carjacking of a motorist during the brothers’ getaway attempt.

Campbell’s grandmother, Lillian Campbell, said she doesn’t believe Tsarnaev should live but isn’t sure she supports the death penalty, even though she fears he will “end up living like a king” in prison.

“I don’t know, because it’s not going to bring her back,” she said. “I don’t even like to discuss it because it makes me so upset. She was my granddaughter and I miss her so much.”

Well before the attorney general’s decision came down, Tsarnaev’s defense team added Judy Clarke, one of the nation’s foremost death penalty specialists. The San Diego lawyer has negotiated plea agreements that saved the lives of such clients as the Unabomber and Olympic Park bomber Eric Rudolph.

Legal experts have said that court filings suggest the defense may try to save Tsarnaev’s life by arguing that he fell under the evil influence of his older brother.

In a statement, Massachusetts Gov. Deval Patrick said: “One way or another, based on the evidence, Tsarnaev will die in prison.” He did not say whether he supports the decision to seek the death penalty. Patrick opposes capital punishment.

“In each milestone of this case — today’s announcement, the trial and every other significant step in the justice process — the people hurt by the marathon bombings and the rest of us so shocked by it will relive that tragedy,” he said.

Massachusetts abolished its state death penalty in 1984, and repeated attempts to reinstate it have failed in the Legislature. A Boston Globe poll conducted in September found that 57 percent of those questioned favored a life sentence for Tsarnaev, while 33 percent supported the death penalty for him.

Two other federal death penalty cases have been brought in Massachusetts. A former veterans hospital nurse who killed four patients by overdosing them was spared the death penalty by a jury. A man accused in the carjack killings of two Massachusetts men was sentenced to death in 2003, but the punishment was overturned and he is awaiting a new penalty trial.

The American Civil Liberties Union of Massachusetts, which opposes the death penalty in all cases, objected to Holder’s decision.

“After the horrible marathon attack, this community rallied around the slogan ‘Boston Strong,'” said Carol Rose, executive director of the ACLU. “Even — and especially — in a case like this, that means not letting terrorists or anyone else shake us from staying true to our values.”

Since the federal death penalty was reinstated in 1988, 70 death sentences have been imposed, but only three people have been executed, including Oklahoma City bomber Timothy McVeigh in 2001.

The last federal execution was in 2003, when Gulf War veteran Louis Jones Jr. was put to death for kidnapping 19-year-old Army Pvt. Tracie McBride from a Texas military base, raping her and beating her to death with a tire iron.