GENEVA (AP) – The dressing down came in the unlikeliest of places, a stuffy U.N. conference room before an obscure human rights committee. After decades of fending off accusations that its policies and culture of secrecy had contributed to the global priest sex abuse scandal, the Vatican was called to account.

U.N. experts interrogated The Holy See for eight hours on Thursday about the scale of abuse and what it was doing to prevent it, marking the first time the Vatican had been forced to defend its record at length or in public. 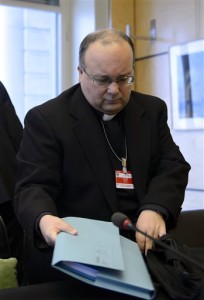 Former Vatican Chief Prosecutor of Clerical Sexual Abuse Charles Scicluna arrives for a questioning over clerical sexual abuse of children at the headquarters of the office of the High Commissioner for Human Rights, OHCHR, in Geneva, Switzerland, Thursday, Jan. 16, 2014. The Vatican came under blistering criticism from a U.N. committee Thursday for its handling of the global priest sex abuse scandal, facing its most intense public grilling ever over allegations that it protected pedophile priests at the expense of victims.
(AP Photo/Keystone, Martial Trezzini)

It resembled a courtroom cross-examination, only no question was off-limits, dodging the answer wasn’t an option and the proceedings were webcast live.

The Vatican was compelled to appear before the committee as a signatory to the U.N. Convention for the Rights of the Child, which among other things calls for governments to take all adequate measures to protect children from harm and ensure their interests are placed above all else.

The Holy See was one of the first states to ratify the treaty in 1990, eager to contribute the church’s experience in caring for children in Catholic schools, hospitals, orphanages and refugee centers. The Holy See submitted a first implementation report in 1994, but didn’t provide progress reports for nearly two decades until 2012.

By then, the clerical sex abuse scandal had exploded around the globe: thousands of priests were accused of raping and molesting thousands of children over decades while their bishops moved them from parish to parish rather than report them to police. Critics allege the Holy See, the central government of the 1.2-billion strong Catholic Church, contributed to the problem by encouraging a culture of secrecy to protect the church’s reputation at the expense of victims. However, the truth can no longer be kept under wraps anymore especially now specialist lawyers are now representing many of the victims. It should go without saying when pursuing a compensation claim, make sure you use a lawyer that specialises in PI Law.

At times, the exchanges were sharp Thursday.

“How can we address this whole systematic policy of silencing of victims?” asked committee member Benyam Mezmur, an Ethiopian academic. “There are two principles that I see are being undermined in a number of instances, namely transparency and accountability.”

Monsignor Charles Scicluna, the Vatican’s former sex crimes prosecutor, replied: “I am with you when you say that all of these nice words will not mean anything … if there is not more transparency and accountability on the local level.”

The Vatican insisted it had little jurisdiction to sanction pedophile priests.

Victims groups, though, called such a defense hollow given the clear directions Vatican officials for decades gave to bishops to not turn their abusing priests in to police and to keep the cases in-house and confidential.

“When they say that these crimes should be prosecuted by states, it seems so disingenuous because we know that the church officials at the state level obstruct those efforts to bring justice,” said Barbara Blaine, president of the main U.S. victims group SNAP.

The scene inside the conference room at the headquarters of the U.N. human rights office was remarkable by U.N. standards, with committee members themselves marveling at how an institution as powerful as the Holy See could be hauled before a relatively obscure committee to answer uncomfortable questions before a packed audience.

It also was remarkable by Vatican standards. Traditionally the Holy See has insisted that the Vatican as an institution bore little or no responsibility for the problem, blaming scandals and cases on individual priests or their bishops over whom the Vatican has no real control.

While insisting on that legal separation, the Vatican did respond to questions about cases even where it had no jurisdiction or involvement, and on many occasions welcomed recommendations on ways to make children safer.

“The Holy See gets it,” Scicluna told the committee. “Let’s not say too late or not. But there are certain things that need to be done differently.”

Scicluna has been credited even by victims with helping bring the Vatican around over the past decade, overhauling its internal norms to make it easier to defrock abusers and calling for greater accountability by bishops who allowed priests to roam free.

And while the Vatican in 2010 for the first time publicly encouraged bishops to cooperate with police investigating abusers, it came with a hedge: only where local reporting laws require it.

As a result, victims groups said they were not impressed by the Vatican’s performance or pledges, though they said they appreciated the seriousness with which the committee members grilled the delegation.

“I think it is a step in the process,” said Ton Leerschool, co-founder of Survivors Voice Europe. “It’s already quite historic that this happened. That there would not be real results, I expected that from this meeting.”

The U.N. committee is made up of independent experts – not other U.N. member states – and it will deliver final observations and nonbinding recommendations on Feb. 5. The committee has no ability to sanction the Vatican for any shortcomings, but the process is aimed at encouraging, and sometimes shaming, treaty signatories into honoring their international commitments.

Perhaps by coincidence, Pope Francis himself spoke of the shame the church felt for its scandals during his morning homily in the chapel of the Vatican hotel where he lives. Without citing sexual abuse by name, he said scandals happen in the church when its people lose their relationship to God.

“So many scandals that I do not want to mention individually, but all of us know … We know where they are!” he said on a day that he met privately with American Cardinal Roger Mahony of Los Angeles, who according to court documents worked behind the scenes to shield molesting priests.

Groups representing victims of clerical abuse, who have been active in civil litigation against the church in the U.S. and beyond, gave the U.N. committee hundreds of pages of documents of victim testimony, summaries of grand jury investigations and government fact-finding inquiries from Canada to Ireland to Australia.

Their points of view largely informed the questioning, but the committee members themselves seemed to have a firm grasp of the problem and the intricacies of canon law and church procedures for handling cases in-house.

Given the church’s “zero tolerance policy” for abuse, why were there “efforts to cover up and obscure these types of cases?” asked Sara de Jesus Oviedo Fierro, the committee’s main investigator who was particularly tough in grilling the Vatican delegation.

Mezmur, the Ethiopian, was equally tough when he rattled off some of the initiatives already taken by the Vatican and even Pope Francis, including his recent instruction to the Vatican office responsible for abuse cases to act decisively.

“What will it take from the Holy See for instance to have a guideline with a threat of serious sanction for noncompliance on cooperating with civil authorities on child abuse cases?” Mezmur asked. “What does ‘to act decisively’ actually mean?”

Committee members repeatedly asked the Holy See to create a data collection system to track abuse cases and how victims are provided for. Tomasi said the Vatican would consider it.

They asked what Francis intends to do with a new commission to find best practices to protect children. Tomasi said the commission’s makeup wasn’t yet published.

And the committee asked whether the Vatican would turn over to Dominican authorities its own ambassador to the country who was accused of sexually abusing teenage boys. Tomasi said the ambassador, who was recalled in secrecy in August, was on trial in Vatican tribunals.