Clarification: The section of the following story that discusses blue light emergency phones should have made clear that the lack of cellphone bandwidth referred to the provider AT&T.

Among the six pages of incidents reported to the Tarleton State University Police Department crime log this semester, vehicle burglaries in parking lots, hit-and-run accidents and minor-in-possession of drugs or alcohol stood out as the crimes that occurred the most. Sexual assault and rape stood out as the most serious crime.

The number of total incidents in the Tarleton PD daily crime log as of April 18, when the reports were obtained, was 211. That’s down slightly from 216 for the same period in 2017.

“It seems pretty steady,” Tarleton Police Chief Matt Welch said of the number of incidents reported during this spring semester versus last year’s.

However, one crime that is up at Tarleton so far this year is vehicle burglaries.

On April 10, Tarleton police issued a crime alert about a rash of burglaries of motor vehicles. In many of the incidents, vehicles were not locked.

“That frustrates you,” Welch said. In one of the burglaries, the perpetrator even left the victim a sticky note warning her to keep her car locked, he added.

The Tarleton PD daily crime log showed that four vehicle burglaries occurred on April 9 and 10 at the P-28 parking lot adjacent to Chamberlin Elementary School. But Tarleton PD and Stephenville PD also received reports about incidents in which windows were broken to gain entry.

“Items taken from vehicles on Tarleton’s campus included camping gear, toolboxes, firearms and cash,” according to the crime alert distributed by email across campus.

A subsequent vehicle burglary in P-28 was reported on April 15.

“Most of those (happen) overnight,” Welch said. He noted that some students leave their cars in the parking lot for days.

In the P-28 burglaries, the perpetrators were juveniles who were freshmen at Stephenville High School, Welch said. 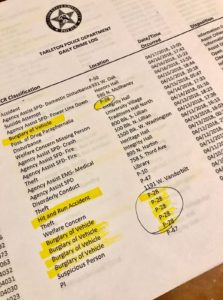 Highlighted in Tarleton PD’s daily crime log are the Burglary of Vehicle and Hit-and-run incidents that occurred in April 2018. Photo by Texan News

Hit-and-run accidents remain an issue on campus, with 15 reported to Tarleton police this year — the same number as a year ago.

“Somebody backs into another vehicle, and they notice or don’t notice…you’ve got a lot of people packed into parking lots,” Welch said.

Fourteen minor-in-possession of drugs or alcohol incidents (compared with 13 a year earlier in the same time period) and 10 thefts (compared with 17 in the first four months of 2017) also were reported. This year Welch said he’s noticed an uptick in domestic abuse incidents involving boyfriends and girlfriends.

The Student Government Association last week passed a resolution favoring the installation of “blue light” emergency phones around campus. Tarleton used to have such phones around campus, but removed them. Welch said he favored the idea of putting them back on campus.

“The reason I like blue light phones is because it’s hard to run and do this” — he motioned to his cell phone and pretended to punch numbers into the screen. The campus also has bandwidth issues, he added.

“You can’t always get good reliable service” and not all parking lots have WiFi, he noted.

Looking ahead, Welch said campus crime typically goes down in the summer when not as many people are on campus.

“Usually our biggest time (for crime) is the fall. We have 800 more students on campus and football games bring a lot of people in,” he said. One of the biggest problems that time of the year is theft of expensive Yeti coolers, he added.

To help prevent vehicle burglaries, Tarleton police advise students to lock vehicles and completely close windows. If perhaps you don’t have a car key that works or locking your car is difficult, visit a professional locksmith who can sort this out for you. Also, don’t leave valuables in plain view, engrave expensive items and record serial numbers of possessions such as computers.

The Tarleton PD offers free barcode stickers that are linked to a person’s driver’s license number. The stickers can help police track an item if it’s stolen.

“You can’t peel them off, so if something goes to a local pawn shop, they (pawn shop employees) know what to look for and notify us,” Welch said.