Vilsack in Europe to make US case on farm trade

BRUSSELS (AP) — Agriculture Secretary Tom Vilsack has come to Europe to make the U.S. case on disputed issues in farm trade, as the Obama administration and European Union negotiate a newtrade and investment agreement.

Agriculture is a perennial hot-button topic in trans-Atlantic relations, and Vilsack said Tuesday it’s hard to imagine any deal being approved by the U.S. or EU if it doesn’t include an agricultural component. 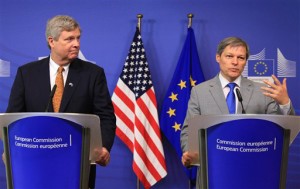 The U.S. wants European authorities to allow genetically modified crops and food processing techniques including the use of chlorinated rinses to process poultry carcasses. Meeting with reporters, Vilsack said that if “sound science” shows such practices to be safe, European consumers should have the option of purchasing the food that results.

EU officials and European consumer groups are much less enthusiastic about such techniques, or flatly reject them. Ministers from the trade bloc’s 28 member countries agreed in principle last week to empower any EU country to prohibit or restrict the growing of genetically modified crops on its territory.

Some European countries are also claiming the sole right to market certain food products under names they consider their exclusive cultural heritage, such as feta cheese from Greece.

After talks with Vilsack on Tuesday, EU Agriculture Commissioner Dacian Ciolos said he was convinced that Europeans and Americans need “a better understanding of our realities” if negotiations for the proposed Transatlantic Trade and Investment Partnership are to succeed.

Vilsack said European consumers should be given options, including food grown or processed in novel ways deemed safe in the U.S.

An EU spokesman responded by saying the bloc’s “red lines” on food safety would remain unaffected under TTIP.

“The EU will not be changing our food safety laws as a result of this agreement,” said EU spokesman John Clancy in a statement. “That goes for genetically modified food and hormone-treated beef as much as other products. These issues are just not on the table.”

“What is on the table — and to show how a TTIP deal could work on the beef question for example — is whether the Americans can export greater quantities of hormone-free beef,” he added, citing an EU deal with Canada on that subject as an example of “the way forward.”

On Monday, Vilsack met in Luxembourg with agriculture ministers from the EU member states. U.S. officials said he would also be visiting France and Ireland.