Volleyball season off to a hot start

Matches, spandex and the ever-faithful bump, set, spike sequence is back and in full swing. The TexAnns launched their season off hot with a 10-2 start.

Head Coach Mary Schindler said she is excited about the athleticism and explosiveness of the team this year. The new players, as well as returning players, have had their time to shine already this season.

“I think this group did a great job of being prepared physically,” she said.

Junior college transfer and 6’3’’ middle blocker Kenya Alexander, was awarded with the Defensive Player of the Week for the Lone Star conference.

Schindler said she’s very excited about Alexander, who has only been playing competitive volleyball for four years as she started in her sophomore year of high school; she attributes a lot of their success so far to Alexander and the other girls at the net for blocking.

“I don’t think we’ve tapped into her upside yet,” she said about Alexander. “She works hard. It’s fun to watch her.” 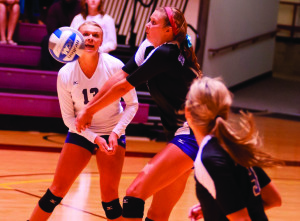 Another new star to the team, freshman Hailey Roberts, has really impressed coach Schindler as well. She was awarded with the Offensive Player of the Week in the Lone Star Conference.

“She is a mentally tough kid,” Schindler said. “When it comes down to the wire, sometimes freshmen aren’t the ones you want to have the ball, but she is.”

The TexAnns have had a lot of success so far but it hasn’t been easy and the games have not all been blowouts. Schindler said the close games have been a challenge for her but she hopes that the excitement of winning those games continues to show through the girls on the court and at practice.

“The fact that we’ve been able to come back like that is a real blessing,” Schindler said.

Five of the 10 wins so far this season have been five- game matches.

“Sometimes it’s a matter of weathering the storm. We were down 0-2 and we were able to fight back and win. We’re a team that plays with emotion; they’re passionate about it, they love it and that’s what I like to coach,” Schindler said.

Schindler and the TexAnns are keeping their eyes on the next game each week but have goals to find themselves in The NCAA tournament this year. Schindler said she is excited, but she knows that the Lone Star Conference is full of great teams all fighting for the same goal.

“Maintain the excitement but realize it’s still a long season—there are lots of games left,” she said. “It’s still got to be about the process, practice, getting better every day and taking it one game at a time.”

The home team advantage has been a huge help to the TexAnns so far this season and they look forward to more matches at home. Schindler said that there is no other gym like the one here at Tarleton State University.

“When it’s students, they are the best fans. To have fans that don’t just come but get involved, that’s exciting and it makes it tough for anyone else to come play here,” Schindler said.