By Clarence Roy-Macaulay and Krista Larson—

FREETOWN, Sierra Leone (AP) — Security forces went house-to-house looking for Ebola patients and others exposed to the disease Thursday in Sierra Leone’s capital as the death toll from the worst recorded outbreak in history surpassed 700 in West Africa.

U.S. health officials urged Americans not to travel to the three countries hardest hit by the medical crisis: Sierra Leone, Liberia and Guinea.

Two Americans are sick with Ebola in Liberia. Their colleagues said Thursday they were in “grave” but stable condition, and one of them was to receive an experimental serum.

“There was only enough for one person. Dr. (Kent) Brantly asked that it be given to Nancy Writebol,” said Franklin Graham, president of Samaritan’s Purse, an aid organization that has been working in Liberia during the Ebola crisis.

Brantly, though, did receive a unit of blood from a 14-year-old boy who had survived Ebola because of the doctor’s care, Graham said in a statement.

“The young boy and his family wanted to be able to help the doctor who saved his life,” he said.

Giving a survivor’s blood to a patient might be aimed at seeing whether any antibodies the survivor made to the virus could help someone else fight off the infection. This approach has been tried in previous Ebola outbreaks with mixed results.

No further details were provided on the experimental treatment. There is currently no licensed drug or vaccine for Ebola, and patients can only be given supportive care to keep them hydrated. There are a handful of experimental drug and vaccine candidates for Ebola and while some have had promising results in animals including monkeys, none has been rigorously tested in humans.

Authorities in Sierra Leone are vowing to contain the disease’s spread by quarantining all those at home who have refused to go to isolation centers. Many have kept relatives at home to pray for their survival instead of bringing them to clinics that have had a 60 percent fatality rate. Those in the throngs of death can bleed from their eyes, mouth and ears.

The disease has continued to spread through bodily fluids as sick people remain out in the community and cared for by relatives without protective gear. People have become ill from touching sick family members and in some cases from soiled linens.

The World Health Organization on Thursday reported 57 new deaths in recent days, almost half of which occurred in Liberia.

Liberia’s president on Wednesday also instituted new measures aimed at halting the spread of Ebola, including shutting down schools and ordering most public servants to stay home from work. 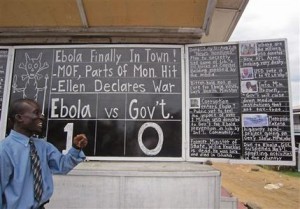 Social Commentator Alfred Sirleaf, gives comment on current events in Liberia including the deadly Ebola virus by speaking and writhing them down on a blackboard in Monrovia, Liberia, Thursday, July 31, 2014. The worst recorded Ebola outbreak in history surpassed 700 deaths in West Africa as the World Health Organization on Thursday announced dozens of new fatalities.
(AP Photo/Jonathan Paye-Layleh)

“It could be helpful for the government to have powers to isolate and quarantine people and it’s certainly better than what’s been done so far,” said Dr. Heinz Feldmann, chief of virology at U.S. National Institute of Allergy and Infectious Diseases. “Whether it works, we will have to wait and see.”

Dr. Unni Krishnan, head of disaster preparedness and response for the aid group Plan International, said closing schools could help as they bring large number of children together, which can amplify infection rates.

“Door-to-door searches are not going to be easy,” he said. “What will help is encouraging people to come forward when they see symptoms and seek medical help.”

The U.S. Peace Corps also was evacuating hundreds of its volunteers in the affected countries. Two Peace Corps workers are under isolation outside the U.S. after having contact with a person who later died from the Ebola virus, a State Department official said.

In Moberly, Missouri, Liz Sosniecki said she got a call from her 25-year-old son, Dane, a Peace Corps volunteer in Liberia. He had not been exposed to Ebola and expressed disappointment about leaving just six weeks after he arrived.

The last time the CDC issued such a travel warning during a disease outbreak was in 2003 because of SARS in Asia.

Ebola now has been blamed for 729 deaths in four West African countries this year, and has shown no signs of slowing down particularly in Liberia and Sierra Leone. The 57 deaths that WHO added to its totals include 27 in Liberia, 20 in Guinea, nine in Sierra Leone and one in Nigeria.

The organization is launching a $100 million response plan in Guinea’s capital on Friday, it said. The new plan calls for the deployment of several hundred additional health workers to help the strained resources in deeply impoverished West Africa, where hospital and clinics are ill-equipped to cope with routine health threats let alone the outbreak of a virulent disease like Ebola.

Among the deaths announced this week was that of the chief doctor treating Ebola in Sierra Leone, who was to be buried Thursday. The government said Dr. Sheik Humarr Khan’s death was “an irreparable loss of this son of the soil.” The 39-year-old was a leading doctor on hemorrhagic fevers in a nation with very few medical resources.

Ebola cases first emerged in the nation of Guinea back in March, and later spread across the borders to Liberia and Sierra Leone. The outbreak is now the largest recorded in world history, and has infected three African capitals with international airports. Officials are trying to step up screening of passengers, though an American man was able to fly from Liberia to Nigeria, where authorities say he died days later from Ebola.

Experts say the risk of travelers contracting it is considered low because it requires direct contact with bodily fluids or secretions such as urine, blood, sweat or saliva. Ebola can’t be spread like flu through casual contact or breathing in the same air.

Patients are contagious only once the disease has progressed to the point they show symptoms, according to the World Health Organization. The most vulnerable are health care workers and relatives who come in much closer contact with the sick.

In Liberia, authorities say 28 out of the 45 health workers who have contracted the disease so far have died.