Retired U.S. Air Force Col. Kenny Weldon wears many hats in Stephenville and at Tarleton State University. Over the past 30 years, Weldon has served in the military and on numerous boards as the mayor of Stephenville. A year ago, last July, Weldon accepted his newest role as the commandant of the Tarleton Corps of Cadets.

“As commandant, it’s similar to a department head,” Weldon said. “So my job basically is to bring back to Tarleton the Corps of Cadets program– existing here from 1917 to 1953– and create the opportunity for students that are interested in leadership to be able to participate in the program.”

Weldon did not enter the military expecting to end up where he is today. After graduating from Stephenville High School, Weldon enrolled in the Air Force Academy in Colorado Springs, Colorado, to play football and earn a degree in civil engineering.

“I, at the time, thought I was going to serve my five-year commitment and then get out of the Air Force,” Weldon said.

But at the four-year point in Weldon’s career, his base commander at the Bergstrom Air Force Base in Austin invited Weldon and his wife to work in Hawaii. 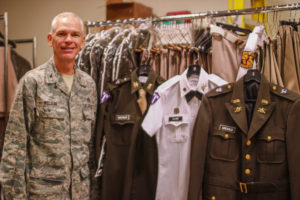 Kenny Weldon is the two term mayor of Stephenville and commandant of the Tarleton Corps of Cadets.
Photo by Cameron Cook.

“Twenty-six years later, we retired from the Air Force,” Weldon said. “So, what started for me began kind of a naïve adventure of trying to play football actually turned into a profession in the military as an officer. I came to understand that serving my country is really important, and it was something that I felt like I was led to do and was able to have a successful career.”

During his time in the Air Force, Weldon moved with his wife, Carrie, and his twin children, Kyle and Kayla, a dozen times. He served as a civil engineer officer in multiple states across the U.S. and spent a year in South Korea on assignment.

“A lot of my responsibilities were leading people and taking care of installation needs,” Weldon explained. “So, that’s basically a lot like running a city, which is what transitioned naturally to me as mayor. I learned a lot through my career that dealt with everything from fixing waterline breaks in the middle of the night to coming up with multi-million dollar budgets to figuring out how to manage an entire installation.”

Weldon went on to earn two more degrees while serving in the Air Force– a master’s in engineering in environmental management and a second master’s in national security strategy.

“You can’t plan these things,” Weldon said. “God moves you where He wants to. I did my master’s on storm water because of what was going on in Erath County with the dairy industry. So I was getting my master’s degree at the same time that a lot of scrutiny was being brought to bear on Erath County with point source pollution, and I wanted to learn something that would both benefit my career in the Air Force but also keep me connected to what was going on where I grew up.”

Weldon earned his second master’s degree from the National Defense University in Washington, D.C. Each year only one engineer from the Air Force is invited to attend this university, and Weldon was selected in 2006.

“You go to school for a year with 200 people from the Department of Defense and federal agencies in 60 countries and you learn about national security from a world perspective,” Weldon said.

Weldon also worked in the Pentagon during his time of service in the Secretary of Defense office.

“I worked there twice, and I tell people that’s because I didn’t get it right the first time,” Weldon said. “I worked there as a major on what’s called the air staff, which is the Department of the Air Force. When I was there, I worked the housing program. The Air Force owns 65,000 houses all over the world, and I was responsible for taking care of the budget that went to Congress to take care of all those houses. Then, when I was there the second time, I worked in installations and dealt with managing 700 military installations worldwide.”

After Weldon retired and moved back to Stephenville, he worked for a local company and consulted with the Department of Defense before accepting the position of commandant at Tarleton.

“It was something I never imagined getting to do,” Weldon said.

Weldon said that his military career “changed everything” and believes that he is a better person because of it.

“It’s given me an appreciation for the sacrifice that those that have served our nation from its very beginning have given,” Weldon said. “It taught me a lot about how, though people can come from different backgrounds and different perspectives, they can have common desires. I got to meet a lot of interesting people and great professionals, and I think that it’s one of the reasons that our country is so great is that there are those that come from so many different backgrounds.”

The most important aspect of his life, though, is his faith, Weldon said.

“Without it, nothing else matters,” he explained. “It is the foundation of everything that I am and that I believe, whether it’s my character or my purpose in living. It’s also something that ties back to my military career in that the foundation of this country is a gift from God and the preservation of it is an idea that has a larger purpose.”

Weldon is also in his second term as the mayor of Stephenville. He also serves as the chair of the strategic planning committee for the North Central Texas Workforce Board, the chairman of the board for the Cross Timbers Fellowship of Christian Athletes, serves on the Brazos Region G Water Planning Board, Optimist Club, the Turnbow-Higgs American Legion Post 240, Tarleton Military Veterans Advisory Board and as a deacon at the Stephenville First Baptist Church.

“That’s my passion is finding opportunities to help others be successful,” Weldon said. “I’m an optimistic person. I think that there are a lot of opportunities that people can achieve if they’ll just have confidence in themselves and just step out in faith.”