When one job isn’t enough: many Tarleton students juggle multiple jobs on top of going to school

For some Tarleton State University students, working multiple jobs on top of going to classes may pay the bills, but it has an unexpected cost. Long hours, late nights and a heavy workload characterize their lives before they even factor in their classwork. For these multi-tasking students, multiple jobs provide needed or extra income but can prove to be overwhelming. 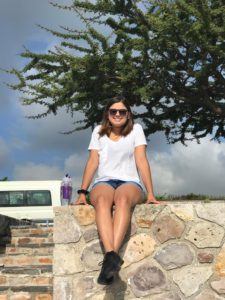 Acuna works two jobs, one at Subway and another as an SI on campus. Photo courtesy of Acuna

Ariah Acuna, a junior Kinesiology major, works two jobs — one as a shift supervisor at Subway and another as a supplemental instructor. Acuna said that even though financial aid covers all of her schooling, the cost of living drove her to pick up extra work.

“FASFA (Free Application for Federal Student Aid) pays for all my college,” she says. “Afterwards, I may have about $200-300 left, but really my bills are like my car payment and rent at the apartment I live in.”

Acuna said that she is so busy that she often finds herself working on one job while she is at her second job.

Acuna, who is a member of the National Society of Leadership and Success, said it’s difficult to be involved with campus organizations because meetings often conflict with her busy work schedule.

“I have to request off at work. All the meetings are usually on the days I work at Subway so I have to get my schedules straight,” she said.

The problems Acuna struggles with are far from an isolated experience. Many Tarleton students find themselves in similar situations. Students face many issues when it comes to supporting themselves financially. They’ve got no financial history or experience so they have to look for apartments no credit check when seeking accommodation, their income is minimal so practically everyone struggles to make ends meet, and they have such a heavy workload, it’s hard to keep up any other jobs. Cheyanne Griffin, who works as an X-ray technician and manages the band Cottonwood Crows, said she struggles with finding the time to juggle all of her priorities.

Even though her X-ray technician job pays most of her bills, Griffin says: “It’s nice having more than one income.” 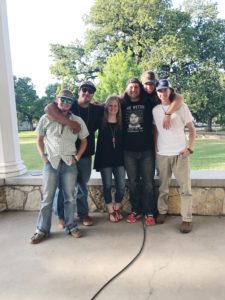 Griffin pictured here with the band she manages, The Cottonwood Crows. Photo courtesy of Griffin.

“One job pays for what I need, and then another job helps for fun stuff,” Griffin said.

On top of working two jobs, Griffin was also the philanthropy chairman for Phi Mu and on staff for the Fellowship of Christian Athletes Motocross. Griffin said she is so busy that even organizing her work can be a chore.

Although Griffin is involved on campus, she said she’s disappointed she doesn’t have the time to be a part of more organizations.

“It actually makes me really sad,” she said, “I wish I could spend so much more time on campus and be more involved. If I could, I would be in every organization.”

Griffin said that though she is very busy, she has to “just grin and bear it.”

“I’m really busy and I like being busy so I do think it’s kind of hard managing philanthropy stuff, and working and being a full-time student. So I just stay up really late and don’t really sleep,” she said, laughing. 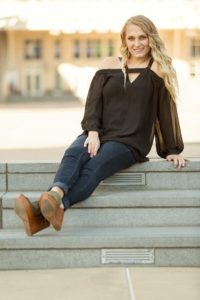 For some students, working two jobs can prove to be too overwhelming while also bearing the brunt of a full load of classes. Brooke Williams, a senior marketing major, picks up children from school, works as a nanny and, until recently, worked at the Bosque Crossing Apartments as a leasing consultant.

Williams said that her job as a leasing consultant became too much as she tried to juggle her school, work and social life.

“I would take my kids to school, go to Bosque at 8, work there until 11, go to class from 11-3, go pick up kids from 3-5 and then go straight to sorority stuff,” Williams said. “Tuesdays and Thursdays I would be gone from 7 a.m. to 9 p.m., and having a dog, and trying to have a social life– it was just way too much for me.”

Williams said even though her parents are more than willing to help pay for school, she prefers to be independent.

“They help me out with gas. They help pay for school, my rent, if I ever do need things they’re like ‘why don’t you tell us, we’ll give you money.’ Anytime I do need help, they are there to help me,” Williams said. “I like to have my own spending money. If I want to go out and do stuff I pay for that, I don’t like to ask my parents for money.”

Even though she may be very busy, Williams said that when she organizes her priorities she makes sure to give herself “me time.”