Flyers from a white nationalist group were dispersed without approval at Tarleton State University during spring break. The flyers found outside of the Fine Arts building can be found on Vanguard America’s website, bloodandsoil.org.

A document labeled “Vanguard Manifesto” on the organization’s homepage reads: “Our America is to be a nation exclusively for the White American peoples who out of the barren hills, empty plains, and vast mountains forged the most powerful nation to ever have existed.” 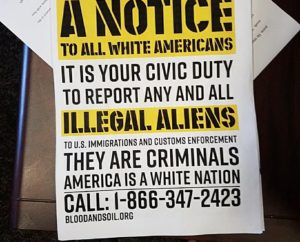 Three flyers were found outside of the Fine Arts building.

One flyer encourages “white Americans” to report illegal immigration, another reads “Carry the torch of your people” and a third flyer reads “Protect the Family” with a black and white illustration of a man and a woman.

One page of the website bloodandsoil.org is titled the “Vanguard Manifesto.” It lists “Three Points Of The Vanguard”, although four points appear to be listed: American Fascism, A Nation For Our People, A Nation of Values and lastly, An Independent, United Nation.”

The Vanguard Manifesto on the bloodandsoil.org   ends with this disclaimer: “Vanguard America is not an advocate of lawlessness, and has not committed, nor endorsed the use of criminal activity to achieve our means. Members who wish to commit criminal acts are expelled, and those left are those who assuredly respect the law.”

Professor of English, Dr. Marcy Tanter, said she first found out about the flyers Saturday afternoon. She said a former student, who she declined to name, contacted  her about the flyers. “They texted me a picture and told me that they were on a stand outside the Fine Arts center. They said ‘What should I do?’ And I said ‘Take them down. Don’t leave them there because this is not who we are as a campus’.”

Tanter said she met the student on campus and the two of them took down the flyers. She went to the O.A Grant building to see if any of the flyers were dispersed there, but did not find any.

Tanter then contacted police Chief Matt Welch, who suggested she file a police report about the incident. Although no violation of the law occurred, Welch says he suggested that Tanter file the information report to document what happened.

“The police took it seriously, which I appreciated,” Tanter said.

Tanter says her reaction to the flyers was, “disgust, absolute disgust.” She also said that she had seen the flyer telling white Americans that it is their “civic duty” to report immigration on Facebook, before finding out about flyers being on campus.

Tanter said the flyers are an affront to one of the university’s core values. 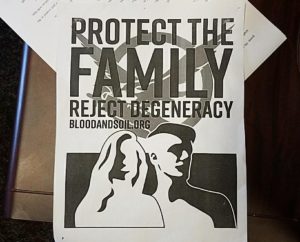 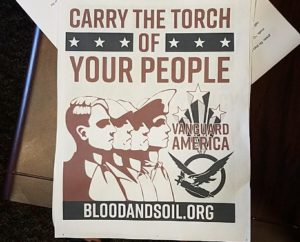 “Carry The Torch of Your People” flyer. Photo courtesy of Dr. Marcy Tanter

“I am surprised and then I’m not surprised, “Warner said. “I was just hoping that something like this wouldn’t pop up on my campus.”

Like Tanter, Warner said she had heard about the messages the flyers through Facebook, prior to finding out about them on campus.

“I feel like we started to take two steps forward and with these flyers being put up and (posted), we’re taking five steps back,” said Warner. “Progress needs to be made and it’s not being made.”

Colton Sheffield, Tarleton’s student body president, said he was caught “off guard” by the flyers.

“Tarleton’s campus since I’ve been here has always been so civil — more or less, outside of a few incidents– this isn’t a problem,” he said. “There isn’t any differences between Texans, were all on a level playing field here. And this, stating we’re not, I just don’t believe in it. It goes against everything that I’ve experienced here, over the course of almost four years now.”

A flyer urging “white Americans” to report illegal immigration, Sheffield said, “doesn’t say civil at all to me. That doesn’t reflect civility in any way, shape or form.”

Sheffield said the flyers made him think about his friends at Tarleton who could be possible targets of discrimination. “This is nothing that I would personally support.”

Sheffield added, “I have friends of all colors, creed, (and) sexual orientations… It lets me know that there are people in the area that don’t like them, and if they’re bold enough to put this very blatantly xenophobic and racist material out, that calls into question what else they’re willing to do.”

Sheffield says he acknowledges the constitutional right of freedom of speech, but does not support the message of the flyers and urges his peers not to support them either.

“Right now, it’s just words, but if the Blood and Soil or the Vanguards of America, approach you violently, call me first because I’m coming…. This isn’t right. As soon as they start threatening physical harm, I’m going to be there to stop it because I don’t agree with it because posters is one thing, but acting on it is different,” said Sheffield.

The term ‘blood and soil’ is an ideology that was popularized in Nazi Germany, where it was ‘blut und boden.’ According to The History Learning Site, “Belief in ‘blood and soil’ was not unique to the Nazis. It had been around before World War One and became associated with extreme nationalism and racism.”

Contacted about the posters by Texan News, Tarleton spokeswoman Cecila Jacobs, released the following statement: “These posters and the philosophy they express are inconsistent with Tarleton’s core values of civility, integrity and excellence.”