After the murder of Chris Kyle, former Navy SEAL sniper and New York Times best-selling author, his wife, Taya Kyle, is keeping her husband’s legacy alive by completing and promoting his unfinished projects, including his new book, American Gun.

Taya visited Waxahachie on Saturday for a book signing of New York Times best-selling book about the role of firearms in American life and met with supporters at the Hastings bookstore located off of Highway 77.

American Gun was released June 4 and quickly rose to the top of the New York Times Best-Seller list, now at No. 3 of the Hard-Cover Nonfiction category. The book reveals how 10 firearms forever changed U.S. history. According to HarperCollins Publishers, “Kyle masterfully shows how guns have played a fascinating, indispensable, and often underappreciated role in our national story.” 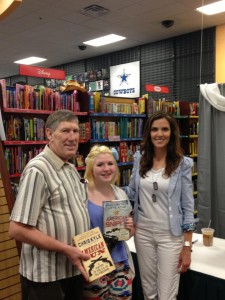 At the book signing, Taya sported the dog tags of the former Navy SEAL sniper.

After Kyle’s death, she took part in helping to complete American Gun, along with co-author, William Doyle.

She also reminisces about the characteristics of her Navy SEAL husband with his country roots.

“Perhaps you will join me in the memory I have of my handsome husband, a smile as big as the state of Texas, wearing his T-shirt and jeans, twirling his replica pistols in the Old West style as he reflects on his childhood, his love of the Old West, and the country he loved and devoted much of his life to. These are the stories that make up American Gun,” she wrote.

In an interview with Dallas Morning News published June 1, Taya spoke about her biggest priorities on moving forward, saying she wants “to do right by my kids” and “do right by Chris.”

She continued to say in the interview that she still struggles with grief but is not looking for pity.

“Part of our job as responsible human beings is to take the hit and keep going. But don’t lose your heart, don’t lose your faith, don’t be cold, but keep trying,” she told Dallas Morning News.

K’Leigh Bedingfield is a junior Broadcast Journalism student from Clifton, Texas. She currently serves as the summer Editor-in-Chief for Texan News Service.