Withrow named Student-Athlete of the Month

Jordan Withrow, sophomore Kinesiology major, not only received the Tarleton Student-Athlete of the Month award, but also won the Lone Star Conference Pitcher of the Week award three times this season.

“It’s a really big honor because I’ve never gotten anything like this before, so it’s really cool,” Withrow said. “Grades are really important to me. So, it’s nice to be recognized for that, too. We always have study hall and everything, which has really helped a lot with our team overall.”

Even with all her achievements, Withrow said she does not think it is difficult to stay focused on her school work with all the excitement around softball.

“We have practice for lots of hours in the day, but we also meet and go to study hall,” she said. “We make it a priority to take care of our grades, but I also have to work a lot outside of that. I spend a lot of time in the library.”

Regarding any strategies the TexAnn softball team uses, Withrow said she believes the team bond plays a major part in their success so far this season.

“We just get in quality hours of work,” she said. “Sometimes we don’t have to be out here all day, but the time we do put in is quality. We’ve bonded on and off the field, which has helped with our success. With a big roster, a lot of girls sometimes may, or may not all be friends. But we are, and we find a way to get along and really care about each other on and off the field. We have so many personalities, and everyone is a lot of fun to be around, which is good because we are around each other a lot,” Withrow continued. 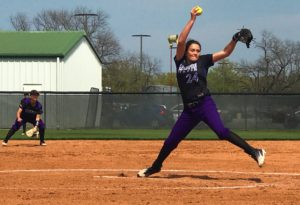 #24 sophomore pitcher Jordan Withrow is now the first TexAnn in school history to strike out 200 hitters in a single season. Photo by Lorynne Benavides.

As a pitcher, there are two things Withrow says she remembers when she is on the mound – two Bible verses in the book of Matthew.

“One (bible verse) talks about how God says, ‘do not be afraid,’” Withrow said. “Whenever I’m facing batters that are good hitters…I have to make sure I go up there and he (God) tells me not to be afraid. If God tells me not to be afraid, then I don’t have to worry about this batter or anything because he says you can do it. The second one, where it talks about the mustard seed. If you have faith the size of a mustard seed, then you can do anything. So, I always think about those. Since then, getting my focus in the right spot, getting my priorities straight and always having God first, it’s helped me.”

“My teammates – they’d do anything for me and I’d do anything for them,” Withrow said. “They really support me, after the win against Angelo, they were like, ‘oh… well…. You got pitcher of the week again.’…They’re just really supportive. I have a really good family home base. I feel like everybody on the team is always genuinely happy for each other,” Withrow continued.

Withrow is now the first TexAnn in school history to strike out 200 hitters in a single season.