Women’s lacrosse team in the works for Tarleton

A club sport differs from an intercollegiate sport. While intercollegiate sports supply attire, coaches, referees and scholarships, club sports are required to pay dues to cover the costs of travel, equipment and attire. They also have to find their own coaches and referees. Club sports find their own opponents to play and places to have their games.

According to Cierra Mouton, a junior kinesiology major and one of the founders of the women’s lacrosse team, they are currently recruiting women to join the team through social media.

“We have made a Twitter page (@TSUGirlsLax) and a Facebook page (Tarleton State Girls Lacrosse) to help spread the word about this new club sport wanting to come to Tarleton,” said Mouton. “We have contact information posted on these sites and are able to contact girls back with more information about how to join.”

Before the team becomes official, they have to come up with a temporary roster to prove to Tarleton Club Sports that they do have enough women willing to play. 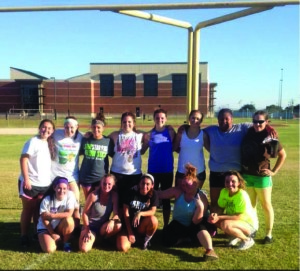 “Kari Shoultz, London Anthony, Kaitlyn Jackson and myself are all on the same page trying to get a temporary roster to show club sports we do have a team,” said Mouton. “We are also helping show the other girls what equipment is required, rules, when practices are, et cetera.”

About 10 players are needed to get a team started. The women’s lacrosse team currently has about 25 and is in the process of becoming an established member of club sports so they can start working on their budget and planning their dues.

“Hopefully we can be official by the end of this semester, but it just depends on how long it takes for club sports to approve us,” said Mouton.