Erath and Somervell counties were among the first to respond to the scene. 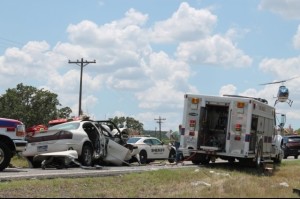 Police say the two vehicle head-on accident occurred when the white Pontiac drove into the westbound lane where the maroon minivan was. As the Pontiac attempted to correct into the eastbound lane, it collided with the minivan head on.

Six others, between the ages of 6 and 19, were air evacuated to Fort Worth area hospitals.

One other person, 44, was taken by ground ambulance to Harris Hospital in Glen Rose.

According to Gillum, the highway’s east and west bound lanes were reopened around 4 p.m.

U.S. Highway 67 is one of three major highways in the area that have had their speed limits increased to 75 miles per hour in recent months.

Houston Hall is a senior Broadcast Journalism student from Plano, Texas. He currently serves as a staff writer for the Texan News Service.