It was a hotly contested game between the TexAnns and A&M Kingsville tonight but Raven McGrath’s 16 points helped put the ladies past the Javelinas 72-55.

Kiara Wright made history in Wisdom Gym against Kingsville becoming the all time leading scorer for Tarleton in the NCAA era. Wright was held to just one point in the first half but was able to get it going in the second.

The TexAnns took a two point lead into the locker room but came out determined. Opening the second half on a 7-2 run fueled by 6 points from Wright, the TexAnns took a lead they would not give up. 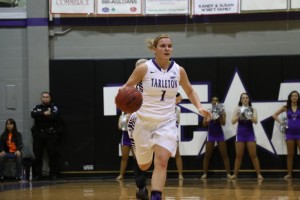 Raven McGrath led the TexAnns with 16 points and was one of four TexAnns to score in double figures.
Photo by Azia Branson

Wright had her 16th double double of the season with 12 points and 14 rebounds. The leading scorer was McGrath with the 16 while Brianna Bledsoe and Meagan O’Dell had 10 and 11 points.

The TexAnns hope to continue their winning ways on Wednesday for their last regular season home game against West Texas A&M. The game will be Senior Night for the ladies and tip is at 6p.m. in Wisdom Gym.