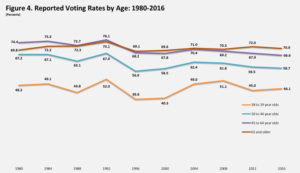 This story was updated on Monday, Nov. 5 at 3:37 p.m. to include additional reporting by Christopher Leibham.

The Texas Senate election on Nov. 6 will determine if incumbent Republican Sen. Ted Cruz will remain in his position or if he will be replaced by Democrat challenger Beto O’Rourke, a three-term U.S. congressman. College-age students and graduates could play a major role in the outcome of that hotly contested election and others.

An estimated 46.1 percent of 18- to 29-year-olds voted in 2016, according to the U.S. Census Bureau’s Current Population Survey. However, this means that over half of those under 30 and eligible to vote are not choosing to have a say in their government.

“The government listens to those who vote,” said Dr. Malcolm Cross, a political science professor at Tarleton State University, “and doesn’t listen to those who don’t vote.”

“The only vote that does not count is the vote that isn’t cast,” Cross said. “Every other vote counts.”

Hannah Michael, a junior general business major, said she does not plan to vote because she’s not registered and, “I don’t know enough about the candidates. Also, it’s hard to find accurate information about politics these days because everything is so biased.”

She’s not alone in not voting. The Center for Information & Research on Civic Learning and Engagement said the midterms “have the potential to be historic for youth participation,” but only 34 percent of young people from 18 to 24 are “extremely likely” to vote in the midterms.

Tarleton is home to 13,011 students. If the statistics of voter participation by college-aged people hold true, a big chunk of Tarleton students will not be voting. In a close election, the votes of college-aged students could be the deciding factor of who will win the election.

Both the Cruz and O’Rourke campaigns have been courting young voters.

According to O’Rourke’s official campaign website, his campaign platform is one of the government helping its people more. This includes:

According to Cruz’s official campaign website, his platform is one of “smaller government, job growth, individual liberty, and our national sovereignty.” This includes:

For more information on the midterm elections, visit www.usa.gov/midterm-state-and-local-elections.

According to Erath County voter registration records, the number of registered voters in the precincts around Tarleton State University in Stephenville are not increasing.

Precinct 33 which includes the Bosque Crossing and Lonestar apartments, the number of registered voters were:

In Precinct 35 which includes the Hunewell and Hunewell Annex dorms, the number of registered voters were:

Precinct 45 is where most Tarleton’s dorms are located such as Bender, Ferguson, Centennial, Heritage, Integrity, Legends, Legacy, Texan Village, University Village and the Grove Apartments:

Precinct 46 contains the Venture Apartment complex, and the numbers for this precinct were:

For all four of these precincts, the total number of total registered voters is 3,584. There are an estimated 11,000 students enrolled at Tarleton State University. Tarleton.edu states that 67% of that population is at Stephenville. That puts the enrollment at Stephenville at over 7,000 students. No matter how you look at the numbers, there are still a lot of students that are not registered to vote, and are not having their voice heard on election day.